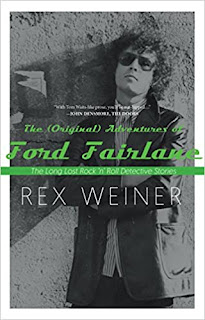 The 1970s witnessed a rebirth of interest in the hardboiled private eye. This new wave of gumshoe scribes paid tribute to their pioneering forebears, like Dashiell Hammett and Raymond Chandler, but also modernized the genre and its hero for their own time. Bill Pronzini's Nameless Detective series started in 1971 with The Snatch; Robert B. Parker's first Spenser book, The Godwulf Manuscript, appeared in 1973; James Crumley debuted two beloved series characters, Milo Milodragovitch in The Wrong Case (1975) and C. W. Sughrue in The Last Good Kiss (1978); Lawrence Block launched Matthew Scudder in Sins of the Fathers (1976); and Marcia Muller introduced Sharon McCone in Edwin of the Iron Shoes (1977). The new breed of private eyes was so successful that their influence and popularity—and, in several cases, sequels—continue to this day.

Into this fray rode Rex Weiner’s Ford Fairlane, an ex-bouncer-turned-punk-rock-PI who made the New York and L.A. scenes in two serialized stories in the New York Rocker and the L.A. Weekly in 1980. Long out of print, both are now collected in The (Original Adventures) of Ford Fairlane: The Long Lost Rock ’n’ Roll Detective Stories (2018), which also includes an insightful “Backstory” by Weiner, as well as contextual interviews with the stories’ original editors, Andy Schwartz of the Rocker and Jay Levin of the Weekly, and with filmmaker Floyd Mutrux, who first tried to bring Fairlane to the screen (he is not at all responsible for the obnoxious Andrew Dice Clay–fronted adaptation from 1990, that dishonor belongs to Renny Harlin). The reappearance and reappraisal of the Fairlane stories is overdue, as these should-be classics of the genre strike a perfect tonal balance between tradition and innovation.

Ford Fairlane is an audacious and awesome appropriation of the private eye archetype, a character the likes of which had never been seen before: a detective as music savvy as he is tough. While reading the stories, I thought of Johnny Thunders’s cover of The Shangri-Las’ “Great Big Kiss” on So Alone; there’s nothing ironic about Thunders’s version—he clearly loves The Shangri-Las (and who doesn’t?)—but the spin is totally up-to-date. Similarly, Weiner approaches detective fiction with punk rock brand of reverence. Despite displacing the detective amid a world of hipsters and pill heads and having him deliver punch lines about The Police, Ford Fairlane is a tried-and-true hardboiled antihero. World weary, violent when pushed, and a consummate loner, he contains elements of Hammett’s Sam Spade and Continental Op, Chandler’s Philip Marlowe, and Mickey Spillane’s Mike Hammer, although Fairlane has much better taste in music (did those earlier guys even listen to music?). Importantly—in fact, crucially—Weiner is as careful a stylist as his models, with an ear for musicality of the hardboiled mode in all its punchy, staccato prose and clever wordplay:

Bullhorn burped warnings. Barricades blocked off the avenue ahead. Cops swarmed across the dirty sidewalk like gnats on an open wound. I checked the speedometer; it was nudging ninety. I checked Shirley. She was nineteen going on thirty-eight. If this didn’t work I could be doing eight-to-ten—or else we’d both be six feet under. A hundred-to-one chance we could get away with it. I looked at the speedometer again. The numbers computed in that slot machine I call a brain. It came up cherries. As Van Morrison says, it’s too late to stop now, so I pushed the girl underneath the dashboard and Evel Knieveled the accelerator.

What’s most striking about the Ford Fairlane stories is the authenticity of their sense of time and place. They are an immensely entertaining lens into the now-legendary music subculture of the late 1970s and early 1980s. A former musician (who threw a meringue pie in Joey Ramone’s face at CBGB), Weiner knows intimately the people and places that he writes about. In the first story, “New York,” Fairlane is hired to find a missing Link Wray lyre-body Danelectro guitar and comes face-to-face with an archvillain out to destroy guitar-based rock, who terrorizes our hero with a gigantic “monstrous jukebox” that plays Lou Reed’s Metal Machine Music. (As Fairlane wryly observes, “These guys were connoisseurs of torture.”) The case also takes him to iconic spots like the Mudd Club, Trax (where he runs into Lydia Lunch), and Hurrah (where he talks with James Chance). Much like Block’s Matthew Scudder series, Weiner’s prose is infused with geographic verisimilitude, a priceless been-there-passed-out-there sense of realism.

The second story, “Los Angeles,” is structured like a never-ending night on the town, highway after highway, bar after bar, club after club, with the radio dial permanently set to Rodney Bingenheimer’s storied KROQ radio show, Rodney on the ROQ. The plot has Fairlane trying to rescue a kidnapped singer, Wanda, whom he was originally hired to bodyguard. His primary suspect is Start Kaster (a pun off the famed guitar model), personal custodian to The Eagles (obviously not Fairlane’s favorite band), and Wanda’s boyfriend. The case leads Fairlane to a Darby Crash show at the Starwood, where he narrowly escapes capture by the police when a mosh pit breaks out. Among the cameos in his story are Esther Wong (of Madame Wong’s West club-fame), Slash editor Kickboy Face, rockabilly singer Colin Winski, and Belinda Carlisle of The Go-Go’s, to whom Fairlane quips, “Maybe you’ve got the beat, but I’ve got a job to do.”

For all their fun, the historical value of Weiner’s stories is, sadly, all too precious. “Los Angeles” was published in the fall of 1980. By the end of the year, Darby Crash, ex-lead singer of The Germs, would be dead; he never lived to record the song that Fairlane hears live, “Beyond Help.” Kickboy Face’s magazine, Slash, would also be gone by year’s end. Colin Winski, who had released his debut solo album, Rock Therapy, that year, would not release another album until 1993. Meanwhile, The Weirdos, who are briefly mentioned in the story, would disband by mid-1981, and Club 88, where Fairlane goes looking for Wanda, was also shuttered around that time.

The world Ford Fairlane inhabited has disappeared. Lucky for us, Rex Weiner was there to capture it in all its gritty glory.

This review was originally published October 20, 2018 by the Los Angeles Review of Books. It appears here in a revised version.

Posted by Cullen Gallagher at 6:12 AM