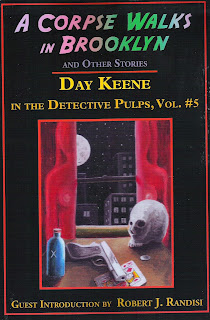 Ramble House's fifth volume of Day Keene's pulp stories is one of their strongest collections in the series thus far. Edited by John Pelan and featuring an introduction by Robert J. Randisi, A Corpse Walks in Brooklyn: Day Keene in the Detective Pulps, Vol. #5 includes three of Keene's series characters (Silent Smith, Herman Stone, and Matt Mercer) in characteristically excellent tales, but it's the non-series stories that really elevate this volume.

While Keene's pulps often focused on innocent everyman protagonists who were framed or detective-proxies (be they private eye, cop, or a stand-in), some of his funnest—and darkest—yarns were about criminals. The one in this collection is among my favorite of Keene stories. "I'll Be Seeing You" is about a racketeer who plots to get rid of the newly-elected D.A. when he meets her sister one night, unaware that she has a plan of her own underway. The ending has a delightful and dark sense of poetic justice. Keene's criminal-centered stories are often shorter than his detective-based narratives, which gives them an extra sense of bit—and "I'll Be Seeing You" shows Keene's teeth at their sharpest.

Arguably one of Keene's most experimental and stylistically ambitious stories, "Three Dead Mice" reads almost like Jorge Luis Borges, and shows just how sophisticated a craftsman Keene could be. In telling the story of an ex-bootlegger and ex-chorus girl who try to assassinate Hitler, Keene employs seven narrators and multiple narrative formats (including interrogation transcripts and inter-office memos). Quite sophisticated in its construction, this WWII tale also packs a lot of intrigue and suspense.

The collection also features two noteworthy stories that are characteristic of Keene's pulp style. "A Corpse for Cinderella" is a shudder pulp-style yarn about a woman who believes she has the kiss of death—in keeping with the genre's tradition, the seemingly supernatural is ultimately revealed to be rational, and Keene allows his imagination to go wild as he attempts to explain everything. And another favorite is "Seven Keys to Murder," in which Keene transplants the classic old-dark-house inheritance whodunit to the Florida keys, and shows his ability to transform and personalize archetypical plot devices to make them fresh.

Overall, this is another great collection of Keene's pulp stories that displays the strength of his writing during this period. 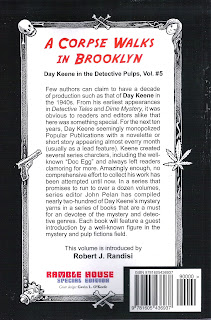 Here's a rundown of the stories included:

"A Corpse Walks in Brooklyn" - It'll take more than a measly bullet to kill broadway gambler Silent Smith—and now that he's recovered, he wants to know why the shooter took the list of Navy discharges that was in his coat pocket.

"The Stars Say Die!" - All across Chicago, people are mysteriously dying from carbon monoxide poisoning, and it's up to cop Herman "The Great" Stone to get to the bottom of the mystery.

"Herr Yama from Yokohoma" - FBI agents Lee Sin and Brad Hatfield, aka  "The Trouble Twins" and "The Corpse Makers," are after an assassin who is killing prominent citizens of New York City's Chinatown district.

"Seven Keys to Murder" - As family heirs gather in Florida to hear about a will, someone takes a shot at the executor, and with the storm raging outside, they're all trapped in the house with the shooter.

"I’ll Be Seeing You" - A racketeer plans to get rid of the D.A., while the D.A.'s sister has her own plans for the racketeer.

"A Corpse for Cinderella" - Hash slinger Mitzi Faber stands to inherit millions, but she also thinks she's inherited the kiss of death!

"Claws of the Hell Cat" - Private eye Matt Mercer searches for a wife on a bender who is sending wires to her husband for $10,000 while somebody else is takes shots at Matt in attempt to get him off the case.