"The Burglar Who Met Fredric Brown" by Lawrence Block (2022) 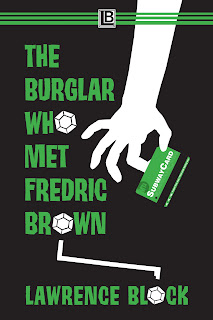 Wouldn’t it be nice to curl up with a good book, doze off, and wake up in that world? That’s a question Lawrence Block explores in his latest novel, The Burglar Who Met Fredric Brown, the 12th novel to feature professional thief and Greenwich Village bookstore-owner Bernie Rhodenbarr. No one’s asking me to contain my enthusiasm, and so I won’t—I absolutely loved this book, and I think any of Bernie’s many fans will, too.

As a big fan of Block and his Bernie series, this didn’t disappoint in the slightest, hitting all the hallmarks of the series that readers have come to expect. The humor, the Greenwich Village setting, the warm friendship between him and series regular Carolyn, and of course the burglary. But Block also takes readers into new territory. The Burglar Who Met Fredric Brown is much more a fantasia than the earlier volumes. If you’re familiar with Brown, then you might have a little idea what’s in store, and if not, then it might help to know that Brown was an ardent admirer of Lewis Carroll, and there’s more than a hint of Wonderland in both his works and in Block’s latest. I found Block’s incursion into magical realism to be an absolute delight. 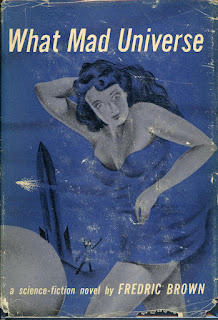 As the book opens, Bernie lives in a world sadly recognizable as 2022. Amazon and eBay have all but killed his business, Barnegat Books, and omnipresent security cameras and electronic keypads have all but killed his other business, burglary. The sixty million-dollar Kloppmann Diamond is only a few blocks from his home, and become of 21st century technology it is painfully out of reach. But after reading Fredric Brown’s science-fiction masterpiece, What Mad Universe (about an alternate New York), Bernie awakens to find his bookstore swarming with customers, there’s no eBay or Amazon to speak of, and the inaccurately-named MetroCard in his wallet is now appropriately named SubwayCard.

A few other things have changed, too. Old neighborhood restaurants and bars have returned, and so, too, has the local bowling alley. Bernie’s also realized that he now has certain amorous feelings towards his best friend in the world, Carolyn, a dog groomer (and occasional partner-in-crime) who is in no uncertain terms a lesbian—except, in this world, she also seems to be experiencing newfound attraction towards Bernie. And those security measures protecting the Kloppmann Diamond? 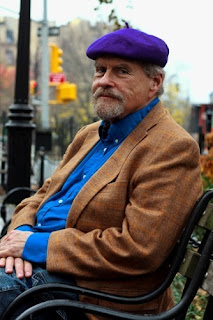 There are a whole lot more surprises in the book, so I won’t spoil any more of the story.

If you’re new to the series, The Burglar Who Met Fredric Brown certainly stands on its own—there’s nothing you’ll need to know from the previous books that isn’t given here. As a fan of the series, though, I think the book rewards familiarity with the characters. The ending, in particular, is a poignant and tender moment between two friends that I found very moving. If this the last outing for Bernie (and I hope its not), no reader could ask for a finer or fonder conclusion.

On the surface, The Burglar Who Met Fredric Brown might seem like a longing for the past, however by the end it’s plain that it is less about nostalgia and more about a love for storytelling. And, in this reviewer’s opinion, Lawrence Block is a raconteur in a league of his own. I was entranced from the first sentence, because Block is a writer with an unmistakable voice, a cadence and phrasing wholly his own. It’s there in the early sex books (albeit in a still nascent and underdeveloped way), it’s there in early masterpieces like After the First Death, it’s there in the Scudders and Bernies and Chip Harrisons, it’s there in his previous novel Dead Girl Blues, and—no surprise—it’s here, too. There’s a musical lilt to Block’s prose, as though you can hear every word spoken aloud. As Bernie reflected while listening to his old fence Abel Crowe, “How could I regret a single moment of the time we’d spent with this particular elderly gentleman?…There was no rushing Abel, and we were happy to listen to every word…”

This being a book about transporting readers to another time and place, I myself was transported to the first time I encountered Block’s work. I was standing in Partners and Crime in Greenwich Village (not far from Bernie’s fictional bookstore), waiting for the late-show of W-WOW’s old time radio play. Between Red Bulls, Kizmin Reeves (one of the store’s owners) asked if I had read Block. I replied that I hadn’t. She pulled out One Night Stands and Lost Weekends, flipped to “The Burning Fury,” and told me to “listen.” I wasn’t sure what she meant, but she had great taste and had never lead me astray before, so I did as I was told. I loved the story, but wasn’t sure what she meant by “listen.” So, I asked, and she began talking about Block’s voice. I loved the way she spoke about his work, so I bought the book. It didn’t take long for me to get what she was talking about, and I have been a devotee ever since. 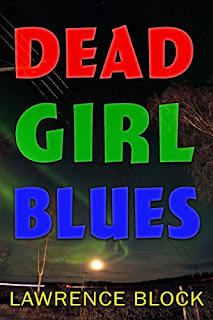 I was struck how much The Burglar Who Met Fredric Brown reminded me of Block’s previous novel, Dead Girl Blues (which I also greatly enjoyed). For anyone who has read Dead Girl Blues, the comparison might seem surprising—it begins with a killing and act of necrophilia, and then follows the murderer for the rest of his life. While there’s hardly anything “funny” about that book (though it does have its own sense of black humor), these are both works of autumnal reflection, both for the characters and their author. In The Burglar Who Met Fredric Brown, Bernie and Carolyn often ask themselves whether which is the best of all worlds—their dreamland without Amazon or cameras, or the real world in which they have no control over change. In Dead Girl Blues, Block revisits the recurring theme of the aftermath of violence, but this time from the perspective of the perpetrator—one who manages to grow and change, and who must carry with him the memory of his horrible deed while he lives a life that almost anyone would be happy to lead.

Block has been writing professionally for nearly seventy years, and there’s been a lot of change and growth within his own writing, and the world in which he writes. Like Bernie, he’s managed to find a niche for himself, and a way to keep going. This reader, for one, is glad that there are still new Lawrence Block books to look forward to reading. Having just closed the covers on this one (beautifully designed covers, I might add, by Jeff Wong), it’s time to head to the bookshelf and choose which world to which I want to be transported this time.

Block's own site has links to various places to buy the book. Mysterious Bookshop here in NYC has signed copies available (for the moment).