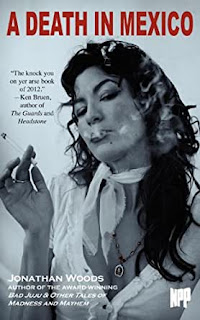 Jonathan Woods’s debut novel, A Death in Mexico (New Pulp Press, 2012), is an outrageous and unruly mescal-soaked murder mystery packed with plenty of euphoric and hallucinogenic highs and none of the regrettable aftereffects. Readers looking for a by-the-books police procedural won’t find anything so straight-laced or conservative in this book; adventurous readers—those willing to drink without first asking what’s in the glass—will savor Woods’s unorthodox mélange of sex and slaughter under the sun.

It all begins when a young female corpse is discovered mutilated in the streets of San Miguel de Allende. Leading the investigation is police inspector Hector Diaz, a man prone to indigestion, ill-timed erections, and hallucinations of Aztec gods. After the corpse is identified as Amanda Smallwood, a young model from Texas, the trail leads Diaz to a local community of expatriate American artists that includes a charming convicted child molester, a Canadian diplomat’s wife, and scores of jilted lovers and wannabe artists living Bohemian fantasies with total abandon—any of whom seem desperate, envious, inebriated, or crazy enough to have committed the murder.

True to form, the case turns out to be more complicated than it initially appeared. Where Jonathan Woods diverges from convention, however, is in the pacing, direction, and ultimate resolution of the narrative. Diaz's investigation doesn't unfold with much organization or exactitude, as it would in a more traditional procedural. Woods' style suggests Henry Miller by way of Grahame Greene. Like Miller, Woods revels in squalid splendor: public urination, rampant intoxication, spiritual and philosophical digressions, honest (and frequently funny) sexuality, and Bohemian exhibitionism. And like Greene, there's a counterpoint between cultural and political intrigue that resists the superficial trappings of tourism and offers a more enlightened perspective.

As Amanda Smallwood’s case develops, San Miguel de Allende reveals itself to be a place out of time, an anachronistic theme park for Lost Generation re-enactors. Save for a couple minor references to a cell phone, A Death in Mexico could be set almost anytime in the 20th century. While the suspects believe they are soaking up an “authentic” cultural experience, they remain ignorant to the marketing ploy they have bought into. Diaz muses, “If it wasn’t for the need to keep the town ‘authentic’ for the tourists […] we’d have decently paved streets. Not these dry steambeds that eviscerate your vehicle and shake your organs loose.” Like El Rey, the thieves’ hideaway in Jim Thompson’s The Getaway where old crooks are recycled into meals, there’s something sinister about the sex-and-art-fueled paradise offered by San Miguel de Allende. While there isn’t anything so gruesome as Thompson’s human meat factory in A Death in Mexico, there’s certainly something cannibalistic about colonialism and its effects in the tourist trade.

In the end, Amanda Smallwood’s death, and the subsequent investigation, amounts to very little. Regardless of the unpleasant truths that Diaz uncovers, or the even darker ones that are left undiscovered, all that matters to the government is that the tabloids have moved on to less sordid headlines, and the tourists still make the rounds at night—not that they ever stopped. In fact, there’s no evidence in the course of Diaz’s investigation that anyone touched by Smallwood’s death was affected in any profound or meaningful way. Perhaps they were too drunk, too jealous, too jaded, or too busy thinking about their next project, their next lay, or their next drink, to take notice of the world in which they lived, and the people they shared it with. Woods doesn’t deny the myriad enjoyments to be had by all in San Miguel’s fantasy world, but nor does he ignore the superficiality, transience, and ultimately the fiction, of such experiences.

A Death In Mexico isn't a puzzle to be solved so much as an opiate to be ingested, and is an impressive follow-up to the author’s first collection of short stories, 2010’s Bad Juju & Other Tales of Madness and Mayhem.

This review was originally published by the Los Angeles Review of Books. It appears here in a revised version.