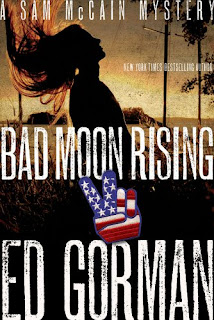 It's coming up on 5 years since Ed Gorman passed away, and not a day goes by that I don't pass by his books on my shelf and think of him. And while I still have plenty of his nearly 120 books—including novels, novellas, and story collections—to get through, I still miss the thrill of hearing about a new Gorman novel, seeing his latest blog post, or reading one of his introductions to a reprinted classic crime novel.

The hallmark of Gorman's style is the utter simplicity and clarity of his language. He doesn't go in for hardboiled-isms, procedural jargon, expletive overload, or any other attention-grabbing affectation. Straightforward prose is more than just a stylistic decision; it's the foundation of Gorman's moral universe. His protagonists shun pretensions of any kind—artistic, social, or political. In both style and substance, Gorman's work radiates a profound sense of honesty. His characters can see the worst qualities in others because they've first recognized them in themselves. Among my favorites of his books is the Sam McCain series. First introduced in 1999's The Day the Music Died, McCain is a lawyer and licensed PI in the small town of Black River Falls, Iowa, and one of Gorman's most compassionate and endearing characters.

By the ninth book in the series, Bad Moon Rising, Gorman was still in top-form. It's one of the best McCains (though, to be honest, I would say that about any of them). Set in 1968, Bad Moon Rising finds McCain investigating the murder of Vanessa Mainwairing, a young girl whose body was found at a local commune. The conservative citizenry immediately points its fingers at Vietnam vet-turned-hippie Neil Cameron. Convinced Cameron is the murderer, Vanessa's war-profiteering father hires McCain to track him down. But as McCain's search reveals that the cultural divide in Black River Falls isn't so black-and-white—that both sides of the proverbial tracks are enmeshed in the same web of adultery, corruption, and exploitation—and he begins to question whether anyone is worth defending at all.

Rather than wax nostalgic or reactionary about the sixties, Gorman cuts through the mythology to reveal a much more nuanced and confused socio-political landscape. As McCain starts to piece together the story, he discovers not some grand conspiracy, but simple, terrible, and understandable motivations. One of Gorman's recurring themes is summed up in his Western Death Ground (1988): "People were just people and sometimes they did terrible things. Everybody did." Gorman's criminals are never monsters; they're as human as we are, just like Sam McCain. They're sick with love, remorse, or hate—or maybe just sick of the world around them. The darkness in Gorman's novels is always uncomfortably real and ordinary.

This review was originally published by the Los Angeles Review of Books. It appears here in a revised version.