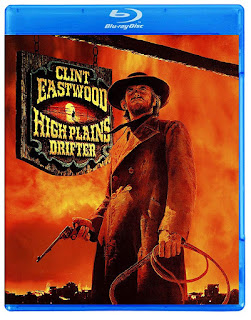 High Plains Drifter (1973) is a landmark film for Clint Eastwood: his second feature as a director (following the stalker-thriller Play Misty for Me) and his first western as director. Among his darkest works, it’s a surreal, disturbing tale that plays out more like a horror movie than a traditional western. Inspired by the murder of Kitty Genovese (killed in public in 1964 while people looked on), High Plains Drifter is also a sharp critique of how society—and especially cinema—fetishes and romanticizes violence and brutality. Gorgeously filmed by Bruce Surtees, who transforms the western landscape into a blazing hellscape, the full infernal glory and grim beauty of High Plains Drifter is on display in a new Blu-ray from Kino Lorber Studio Classics.

The movie begins, as many westerns do, with a stranger riding into town. Here, Eastwood plays the rider, and all he’s ever known as is the Stranger. He immediately arouses the suspicion of the townsfolk of Lago who watch him ride in, and dispenses with the three hardcases who try to jump him in the barbershop. Impressed by his capacity for violence, the town hires him to lead their defense against a trio of killers who are being released from prison that day, and who they suspect will come back to the town for revenge. The Stranger agrees to protect the town in exchange that they grant him all of his wishes. It’s a devil's bargain the town soon comes to regret as the Stranger literally paints the town red, and turns it into a flaming inferno, and the town must pay for their own violent, shameful past.

Dressed all in black, the Stranger is a demonic presence in the town. As one of the townsfolk later remarks, after realizing the wrath which the Stranger has wrought, “It couldn't be worse if the devil himself had ridden into Lago.” Ironically, the Stranger doesn’t bring anything that the town didn’t invite themselves. As he says, “It’s what people know about themselves inside that makes 'em afraid.” And the Stranger shows the town exactly what they have within themselves. He is a manifestation of all their desires, no matter how dark or brutal. He kills because they want a killer to protect them. By raping Callie Travers (Mariana Hill), he actualizes their own misogynist fantasies. And he exploits the townsfolk because they long to exploit their own neighbors.

It’s clear that Eastwood doesn’t admire the Stranger’s actions. Like in Brian Garfield’s novel Death Wish (but not the movie), the protagonist’s violence is intended to disturb, not titillate. In what seems to be an overt nod to Kitty Genovese, Callie Travers admonishes the town for how they stood around and watched her get raped and did nothing to help her. Eastwood is highly critical of not only the Stranger, but also the town which gladly allowed such a character to assume power. This critique of violence also extends to the audience. Recall the opening of the film. As the Stranger rides into town, the townsfolk stare and watch at him from behind windows—almost like spectators in a theater. In this way, Eastwood makes the viewer just as complicit as the town. In this way, High Plains Drifter inverts the moral balance of the traditional western. Western heroes are supposed to set wrong things right—but in High Plains Drifter, there are no heroes, only devils. And, in his own way, the Stranger brings justice to Lago—it’s just not what they were hoping for. It’s a devil’s bargain they make, and it’s a devil’s justice that they receive.

The Blu-ray from Kino Lorber Studio Classics is packed with extras, including commentary by Straight to Hell director and western scholar Alex Cox; interviews with cast members Marianna Hill, Mitchell Ryan, and William O’Connell; vintage promos and trailers; and fun fan-videos by Edgar Wright and Josh Olson from Trailers from Hell.

There’s no doubt about it. High Plains Drifter is as unsettling a western as has ever been made. 48 years later, it hasn’t lost its power to provoke and disturb viewers—and that’s because its power, and its message, remain undiminished. It’s still a highly relevant work of art, and its devil’s bargain still has lots to reveal about society and cinema.

Posted by Cullen Gallagher at 12:39 PM