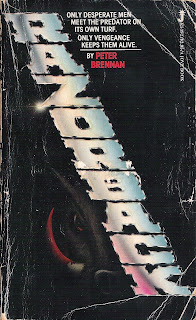 Chris Stachiw was kind enough to invite me to join him and screenwriter/producer Richard Hatem on The Kulturecast to discuss the 1984 Australian film Razorback. In preparation for the podcast, I decided to read the source material. The decision was totally mine, so I have no one to blame but myself. And while I can't say I enjoyed the book, I had a great time discussing the movie and book with Chris and Richard, so many thanks to them for a wonderful conversation. Hope to talk movie with them again soon!

Razorback (1981) is the second novel by Peter Brennan, who first novel was a tennis thriller called Sudden Death (1978). While the movie is a Jaws—esque story of a vicious animal terrorizing a community, the book is a beast of a different sort—a giant 378-page bloated mess.

The novel begins with a promising introduction about a kangaroo and her baby taking its first steps, a pregnant ewe, and a monstrous wild boar who has been driven to cannibalism by drought and lack of food. Unfortunately, after the promising introduction of the titular killer boar, the novel derails itself almost immediately. What begins as an eco thriller-horror novel dissolves into a missing persons-smuggling soap opera with too many competing story lines, too many uninteresting characters, and not enough wild boar action. 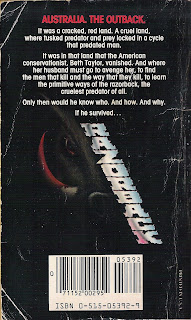 One narrative thread is about Beth Winters, an American journalist who goes missing after she arrives in Australia with her sister, Ginny, to put an end to the slaughter of kangaroos which is driving them to extinction. Ginny and Beth's estranged husband individually lead investigations into Beth's disappearance. Another storyline is about a professional hunter, Jake Cullen, whose son was eaten by a monstrous razorback boar; much like how no one believed Lindy Chamberlain-Creighton when she said that a dingo ate her baby, nobody believes Jake, not even his wife who left him, and so now he hunts boars and waits for the day he can take revenge. There's also another revenge story: a recently-fired PetPak dog food employee who wants to expose the company's diamond smuggling operation. And then there's Ginny's unrequited lust for Beth's husband—who also used to be Ginny's former lover. And then there's the PetPak executives that would do anything to prevent their smuggling operation from being exposed. Occasionally, Brennan will dip back into the world of the baby kangaroo who is trying to outrun the monster boar, only to leave that much more interesting storyline to focus on people who never are developed enough to care about. 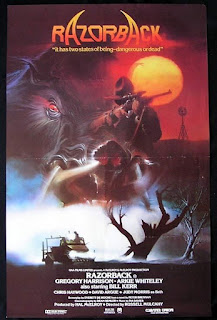 The movie Razorback is an example of an adaptation that smartly simplifies the novel and winds up being superior to its source material. The diamond smuggling is out the window, as is the in-law romance. Instead, the story is simply about a journalist who is attacked by a ravenous gigantic killer boar while on assignment, and the subsequent search for her killer. The script was written by Everett De Roche, who also wrote another amazing ecological horror film, Long Weekend (1978), in which nature strikes back at a couple camping in the woods, as well two other horror classics, Patrick (1978) and Road Games (1981). The film was stylishly directed by Russell Mulcahy, whose background was as a music video director for Duran Duran and Elton John. The cinematographer was Dean Semler, and when you see the film's bold desert colorscape you won't be surprised to know that he also shot Mad Max 2: The Road Warrior (1981).

While I can't recommend tracking down the original novel, the movie of Razorback is a real thrill ride, full of desert delirium and an amazing animatronic boar that is both terrifying but at the same time utterly awesome. The movie turns into reality everything the book should have been about: a monstrous boar with unquenchable bloodlust. Perfect viewing for October.
Posted by Cullen Gallagher at 5:29 PM

Email ThisBlogThis!Share to TwitterShare to FacebookShare to Pinterest
Labels: Peter Brennan, The Kulturecast