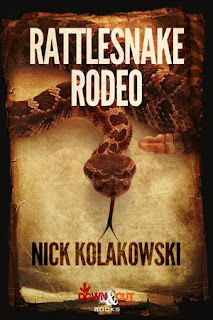 Nick Kolakowski's Rattlesnake Rodeo (2020) kick-starts like the recoil of a shotgun, picking up immediately after the ending of Boise Longpig Hunting Club. Bounty hunter Jake Halligan, his ex- and future-wife Janine, and his dark-web arms-dealer sister Frankie, are on the run. When we last saw them in the previous book, they had been abducted by a group of rich hunters and managed to escape, leaving behind them an abandoned town in flames and a trail of dead bodies, many of whom were influential politicians and businessmen. It was only a matter of time before someone—either the police or an associate of the deceased—would find them, and neither way would end well for our protagonists.

"We were dead. Although I didn’t want to say it out loud, I knew that our life expectancy had almost certainly dropped to zero, no matter what we did or where we went. When you carbonize a group of millionaires, politicians, and millionaire-politicians, the law never stops hunting you, and they make sure you’ll never have the chance to say something embarrassing at trial."

As it turns out, Karen finds them first. Karen is a former federal prosecutor, and sister of the man who founded the Boise Longpig Hunting Club. And she wants Jake, Janine, and Frankie to murder someone for her—a twelve-year-old kid—or else they'll have to pay for the hell they raised, one way or another.

As the trio tries to figure out what secrets this kid has and why they are so threatening to Karen they find themselves knee-deep in a political corruption and coverups that would bring down a lot of careers if they were ever exposed.

Rattlesnake Rodeo is high-octane noir. A classic "man on the run" plot on steroids with enough artillery and action for readers looking for adrenaline rush, but with that dark, doomy core that is noir. While it's more fast-paced than Boise Longpig Hunting Club, which takes its time setting all the elements in place for a big finish, it share's the previous novel's emphasis on character and relationships. Whereas the first book paid more attention to the complex family situation of Jake and Janine and their daughter, this book is more about Jake and his sister, Frankie. His sense of family loyal is strained by the trouble her association has gotten him into—then again, she's also gotten him out of a lot of trouble.

For all of its modern firepower, the core of Rattlesnake Rodeo is about corruption and fighting back. Take away the cell phones and the high-powered rifles, and it's a classic western motif about class conflict and crooked politicians—those in charge are distorting the facts in order to maintain that power, and they'll kill anyone that threatens their dominion. As a metaphor, it's as timeless as it is contemporary, and Kolakowski's re-envisioning of a modern-day western would appeal to fans of Justified. (There's even what appears to be a nod to the show in the book, a doctor named Raylan.)

Rattlesnake Rodeo is available starting 10/26/20 from Down & Out Books.

Email ThisBlogThis!Share to TwitterShare to FacebookShare to Pinterest
Labels: Down & Out Books, Nick Kolakowski