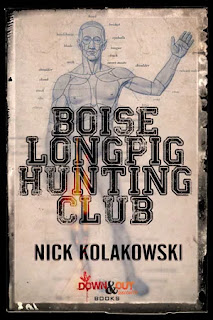 Some thrillers work by introducing the problem early and spend the rest of the book showing the characters to get out of a jam. Nick Kolakowski takes the opposite approach with Boise Longpig Hunting Club (2018): a slow burn to a fiery, explosive climax. Kolawkoski writers character-driven, high-action noir. He builds his story from the characters up, giving us a sense of who they are, the world they've built for themselves, and—most importantly—what they're capable of, before throwing them headfirst into a nightmare that none of them could have planned for. And these are characters that keep heavy firepower close at hand at all times, so if they couldn't see it coming, you know they're in store for something twisted and terrifying.

Jake Halligan is a bounty hunter and Iraq War vet living in Idaho with his ex- and future-wife Janine and their daughter. Jake's sister, Frankie, is a dark web illegal arms dealer who the police and FBI would love to throw behind bars, if they could find her, especially after she helped Jake dispense with some meth heads who robbed him by blowing them sky high with a rocket launcher. And lately the local cops have been giving Jake a hard time, since they know he's Frankie's brother.

But that's not Jake's trouble. Jake's problem is the naked dead girl in his gun cabinet. That sort of thing doesn't sit well with the police, or one's wife. And that doesn't explain how she got into the house, why she was naked, or what she was doing on their property in the first place. By the time Jake figures out the answers to all that, he wishes he wasn't up to his neck in all of it.

In true noir tradition, things start bad and only get worse. Between racking up enemies as a bounty hunter, his sister's reputation, and their father's history as a cop involved in a shady coke bust, it's not like Jake ever really had a chance at having a normal life.

I typically like books that start fast and keep the pace going, and if someone told me it would take half of this book for things to start to fall into place, I'd have said it probably wasn't my style. And I would have been dead wrong. Boise Longpig Hunting Club had me rapt at every page. And the time that Kolakowski takes building up the tension is totally worth it. The payoff, which explains exactly what the Boise Longpig Hunting Club really is, is one hell of a dynamite surprise.

Ultimately, the long build-up is one of the qualities that I liked most about this book. For all it's action and firepower, Boise Longpig Hunting Club doesn't rush things. Kolakowski is a patient writer, and he takes his time meticulously building this world, its characters, and their relationships. That's what gives the climax its impact—not the guns or the explosions, but the feelings the characters have for each other, and their reliance on one another to get out of this thing somehow.

Boise Longpig Hunting Club was originally published by Down & Out in 2018, and Kolakowski has a sequel, Rattlesnake Rodeo, which will be available from Down & Out later this month. My review of that title coming soon. (Spoiler alert: it rules, too.)

Email ThisBlogThis!Share to TwitterShare to FacebookShare to Pinterest
Labels: Down & Out Books, Nick Kolakowski