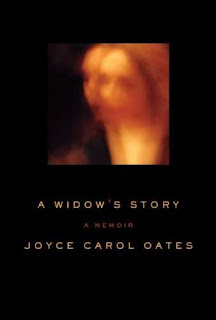 In the April 7 edition of The New York Review of Books, Julian Barnes has a terrific review of Joyce Carol Oates' A Widow's Story: A Memoir. I haven't read Oates' book yet, but I still found Barnes' review very interesting to read. He compares Oates' book (which is about dealing with the aftermath of her husband's passing) with another writer's attempt to channel grief through language, Joan Didion's The Year of Magical Thinking.

There was one particular passage in the review that stopped me in my tracks:

Oates is novelistic and expansive, switching between first and third persons, seeking (not with unfailing success) to objectify herself as “the widow”; and though she occasionally reaches for the handholds of Pascal, Nietzsche, Emily Dickinson, Richard Crashaw, and William Carlos Williams, she is mainly focused on the dark interiors, the psycho-chaos of grief.

I love that description, "...dark interiors, the psycho-chaos of grief." It not only has a great ring to it, but it also captures the psychological aspect of grief as well as its ability to turn psychotic and chaotic, at times.