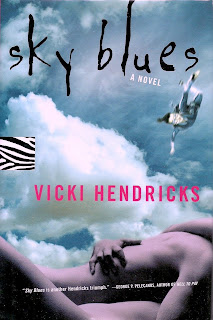 Vicki Hendricks' novels are best expressed as the counterpoint between Florida’s wildlife and Florida’s wild life. Sky Blues, her fourth novel, continues to explore some of the recurring motifs that distinguished her earlier novels: the exoticism of nature and the euphoria of extreme sports (Iguana Love), lovers on the run (Voluntary Madness), and characters with a near-nihilistic sexual appetite (Miami Purity). Hendricks’ novels are as recognizable for their themes as they are for her style, which is deeply invested in her characters’ foxtrot of ecstasy and paranoia. She intuitively captures their increasing dependence on sensation and rapture, and its overwhelming and all-consuming effect on their lives. They walk a doomed path from the start, but Hendricks fills it with thrilling distractions and exciting detours. As Destiny Donne, the protagonist of Sky Blues, says, “It’s the fear of death that makes life so acute—charged and meaningful. It’s not a comfortable feeling, but I want to keep it.” For Hendricks’ characters, death (metaphoric or literal) is inevitable, but they have a hell of a time living it up along the way.

Destiny Donne is a vet in Pahokee, Florida for the local nature preserve. She administers treatment to lions and giraffes but, like the animals she oversees, she is caged off from the outside world. Life is boring, the locals are dull, and the men aren’t attractive. And then skydiving instructor Tom Jenks walked through her office door with a lion cub under his arm. A handsome man and an injured animal—the two things she’s always wanted. “This guy’s a six-foot blond in a long-sleeved cotton shirt and nice soft-fitting jeans. He’s got a chiseled face, a jaw so smooth, I want to stroke it.” 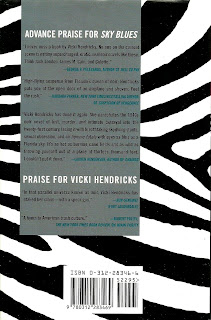 For the moment, at least, Destiny isn’t so deluded about who her charmer is. Her initial observation is, “A shame. So drop-dead gorgeous and a goddamned animal abuser.” On their first date, she remarks, “No matter how corny or superficial the action, just the physical presence of his walking behind me gives me pleasure I haven’t much allowed myself. It’s a short road from there to trouble. I feel it.” From the start, Destiny recognizes where their relationship is headed and the violence and manipulation that Tom is capable of—so why does she stick around to the bitter, disastrous end? It’s a rhetorical question that runs throughout the history of noir: how and why does a character devise their own downfall? What forces lead Destiny from a droll existence as a vet to someone who is diving out of airplanes, dodging murder attempts from a jealous ex-wife, and making her own plans for cold-blooded murder—all in the name of a blond stud who fulfills her sexual appetite and turns her simple life into a treacherous train wreck? Walking this path alongside Destiny is the reader’s prerogative, and making it believable and compelling is the author’s responsibility.

It comes no surprise that Hendricks’ delivers credible, sympathetic noir tragedy in spades with Sky Blues. She nails the inner-life of Destiny, the exponential cravings for sex and danger that obscure her judgment and threatens her life while, at the same time, giving it more meaning than she’s ever known before. Much like the scuba diving in Iguana Love, Hendricks renders the skydiving sequence in such precise mechanical detail and explicit sensation of which only a veteran of the sport would be capable. If you’ve any doubt of this first-hand experience, just turn to the back flap of the dust jacket and view Hendricks’ photo, freefalling and screaming in delight at the camera. Her bio reveals that she has “over 450 dives to her credit.”

Like the scuba diving in Iguana Love, skydiving in Sky Blues offers more than just sport for the characters. It also offers a very regulated community, at once insular but also accepting. “They’re an extreme mixture of ages and types….Anyone can fit in here.” Later, Destiny notes that, “I’ve noticed how unusually nice and considerate skydivers are, and I think it’s because they’re always prepared to die. When life is perceived as short, pettiness is useless and unnecessary. Everybody is connected in spirit.” Skydiving is also a microcosm for the cycle of life and death; but, unlike her real life, skydiving is defined by strict rules, procedures, and natural law. Even when Destiny thinks Tom’s ex-wife is trying to kill her, she can still remark, “Gravity is much more predictable than this woman I’ve never met. I feel safe at the DZ.” Skydiving offers a safe, predictable way to experience life and death: if she follows the protocol, nothing bad will happen. Both diving and sex are described by contrasting purely physical sensation with nihilism. Destiny compares her first sexual encounter with Tom to electricity going through her brain, while her first dive is described as, “It’s a clean, bright blankness, a feeling I never imagined, maybe like death.”

It’s a credit to Hendricks’ clarity as a writer that she can take noir to such a philosophical level without dragging down the pace or compromising the emotional resonance of the characters. Destiny is like many of Hendricks’ cursed protagonists: they all want very normal things, but are incapable of attaining them in any normal fashion. That’s what makes them so compelling, so sympathetic, and so tragic. As Destiny reveals, “I’ve never lived so free of loneliness—with a love of life I never knew existed, despite the threats. I just have to keep my discipline.” For Destiny—just as for Sherri (Miami Purity), Ramona (Iguana Love) and the love triangle of Renata-Jules-and-Richard (Cruel Poetry)—desperation carries her to the extremities of living. And we can thank Hendricks for taking us along for the wild ride.

Sky Blues is another neo-noir winner from Vicki Hendricks. It is available as an eBook from Top Suspense Group.
at April 10, 2011