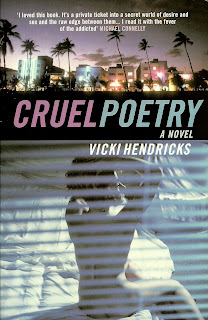 Vicki Hendricks’ earlier novels excelled at capturing single protagonists caught in insatiable and increasingly tightening vices. The protagonists of Miami Purity, Iguana Love, Voluntary Madness and Sky Blues all wanted a euphoric kick to jumpstart their dull lives—and they got it tenfold. With open arms, they welcomed sex, thrills, danger, and murder. Hendricks’ fifth novel, the Edgar-nominated Cruel Poetry, stands amongst her most sophisticated and complex works to date. Hendricks has expanded her view to encompass three narrators whose lives, desires, and crimes are intertwined into a thick knot of noir that can’t be undone.

Renata is what she calls a “pleasure enabler.” Residing in the Tropic Moons Hotel on Miami Beach, Renata lives on a steady stream of sex. Some are lovers, some are clients. It seems to make little difference to Renata. Among her clients is Richard, a married poetry professor whose addiction to Renata is jeopardizing his family and career. Next door to Renata is Julie, a young aspiring writer who listens through the wall and writes about what she hears. She, too, develops an obsession with Renata, and will do anything to protect her, even murder. Soon this trio finds themselves dodging cops, private eyes, drug dealers, jealous lovers, and even hungry, man-eating gators.

The plot set-up may sound typical, but once the story is in motion, Hendricks steps away from the beaten path and goes into some very unusual directions. It would be criminal to spoil the twists that Hendricks has in store for readers, but those are even hardly the best parts of the book. As the title indicates, there’s a larger effect at work in Cruel Poetry (a title which, by the way, would befit any of Hendricks’ other novels). The real mystery is how long will they last before their decadence lead them to irreversible self-destruction. It’s not the path that’s so gripping as the people on the path. Hendricks has crafted her richest cast yet, and by expanding the narrative to include three narrators and about a half-dozen strong supporting characters she’s also created her most engrossing and dramatic narrative. 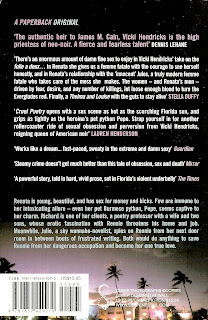 Renata is anything but your ordinary femme fatale. (In fact, I wouldn’t apply this tag to her at all, as she turns out to be the least deadly of the bunch.) Hendricks imbues Renata with an unusual and compelling psychological make-up. Unlike her many companions, Renata does not live for pleasure: she lives to give pleasure. The absence of this key drive (which was crucial to so many of Hendricks’ previous books) takes the character in many surprising directions, and shows how Hendricks continues to push the traditions of noir into new territories and puts her distinctive mark on the genre.

From the very start of Cruel Poetry, Renata tells both Julie and Richard, “I’m a bad influence. I don’t love anybody.” Throughout the novel, she repeats this sentiment in any number of variations: “I’m not worth it” and “I’ll hurt you. I don’t know how to love anybody, any one person.” Renata is graced with an uncanny self-knowledge that reminds of Gloria Grahame. In movies like The Big Heat and Human Desire, Gloria stands alone in her understanding of how the world works, the path she is on, and how badly she will probably end up. Julie and Richard suffer from a classic case of “noir blindness,” in which the truth is right in front of them the whole time, not that they care to pay attention to it. As Rival Schools sing in their song “Shot After Shot,” “Love doesn't know anything / Only believes when it believes / Our thoughts don't know anything.” Julie and Richard’s quest for love leads to oblivion and obliteration. They want control not companionship, and their fantasies are defined by prisons rather than pleasures. They each only see themselves and Renata: there is nothing beyond the two of them. (This should be a clear indication that their dreams could never be realized. Chalk it up again to “noir blindness” that this lack of any rational future doesn’t ring any warning bells for anyone except for Renata.)

There’s something tragic about Renata’s honesty—she never deceives anybody, and yet nearly every character in the book tries to manipulate her in one way or another: through love, sex, murder, blackmail, promises of grandeur that could never be fulfilled. This makes Renata’s devotion to her “intimates” all the more sincere and, in a way, pathological. In a world as corrupt and duplicitous as noir, Renata is a rare symbol of virtue, a perfect embodiment of that contradictory “Miami Purity” (to allude to Hendricks’ earlier novel).

Julie and Richard—along with their predecessors in Miami Purity, Iguana Love and Sky Blues—are dreamers. They may also be delusional, self-centered, and unrealistic. Ok, yes, they’re all of those things, but they’re also driven by very normal desires of fulfillment, excitement, and companionship (sometimes love, sometimes just sex). Renata, on the other hand, is not a dreamer. She lives permanently in the now. Her talent for pleasure can be partially explained by this focused concentration on each individual moment, living it to the fullest without fear of consequence. She’s a pragmatist, and therefore the only one of her bunch capable of dealing with the problems that they put forth upon her. A dead body? She knows what to do. Pissed off drug dealers wanting more money? No problem. No money to give them? Even less of a problem. It’s no wonder that Julie and Richard are dependent on Renata. Though they both long to take her away and care for her like a lost child, more often than not they are the ones in need of Renata’s parenting. And as someone professionally skilled in both comfort and discipline, Renata can play the parts of both mother and father.

Renata’s absence of dreams, however, is a double-edged sword There’s a nihilistic impulse to her actions, an admission that her choices are ultimately meaningless and that tomorrow isn’t worth living for—only today is. We also see this same desire for oblivion in the skydiving of Sky Blues and the scuba diving of Iguana Love. In those previous books, the characters achieved it through complete sublimation into sensation—the ripping wind of a freefall, the liquid touch of the water. Cruel Poetry is Hendricks’ most bodily narrative yet. She’s never shied away from eroticism in her work, but in Cruel Poetry there’s something unusually intense about physical contact, even when they have their clothes on. (Renata’s are usually off, but Julie is rather reluctant to act on her feelings and jump out of her pants.)

Hendricks has been compared with James M. Cain, particularly his novel The Postman Always Rings Twice with its doomed trajectory from desire to death. At first glance, Renata’s declaration, “We’ll figure something out. We’re together in this,” reminds of the iconic line from Double Indemnity: “Straight down the line.” A closer examination, however, shows the dialogue to be quite different. Hendricks is able to innovatively rework noir traditions into something very much her own. There’s something selfish and self-destructive about the lovers of Double Indemnity: if one is going down, so is the other. On the contrary, there is something decidedly selfless about Renata. She’s right that she doesn’t love anyone, but she’s one of the most faithful and giving characters I’ve encountered in noir. She doesn’t bring down those around her; she holds them up while they try to drag her down. Her strength, acumen, and insight into human weakness (even her own), is to be admired. With Renata, Hendricks has crafted an original and haunting character that defies stereotype and breaks the mould.

Cruel Poetry unfolds in a rapturous haze of pleasure and paranoia. This sordid Miami noir is infectious, delirious, and totally gripping.
at April 12, 2011