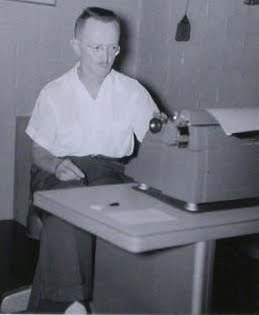 I've said it before, and I'll say it again: Fredric Brown is one of my all-time favorite writers.

As a writer, I admire Brown's craft, ingenuity, innovation, experimentation, and concision (particularly in his short stories). As a reader, I love to be entertained, amazed, shocked, and delighted by Brown's inimitable imagination. I also feel like I've grown with him as a reader. I remember the first time I read him, I totally didn't "get" him at all. The humor was so bizarre that a lot of it went over my head. But with the second book of his I tried, Here Comes a Candle, I was hooked. The radical form (which mixed the novel with theater, radio, and movie scripts, as well as newspaper fragments) was eye-opening, and the story was absolutely thrilling.

The unmistakable alchemy known as "Fredric Brown" was at once enough but also not enough: it gave me all that I wanted to experience as a reader, but left me always wanting more of it (but never more from it). In fact, that there are still books of his on my shelf that I haven't read is only because I am trying to stretch out my enjoyment of his work, and delay the inevitable day when I run out of "new" Fredric Browns. But then I'll have the pleasure of starting over and re-reading them all again.

This personal reaction was by way of introducing the next installment in Pulp Serenade's "Critical Perspectives" series, which examines vintage reviews of classic writers. (Previous entries were on Day Keene and David Goodis.) I'm very pleased to see how well his books were received by critics in his own time, for the most part. You can't please all of the people all of the time, but it looks like Brown came pretty close. Take a look below and see what the critics had to say about your favorite Fredric Brown novel. (I couldn't find reviews for The Dead Ringer, Death Has Many Doors, or The Mind Thing.) 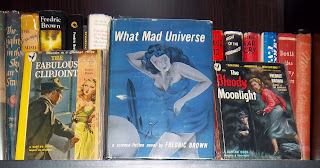 The Fabulous Clipjoint: "The motive for the killing is cockeyed, the plot is screwy and the title of the book has nothing whatever to do with the story." – Anthony Boucher, New York Times, 16 March 1947

**Years later, Boucher revised his opinion: "The Fabulous Clipjoint…received the Mystery Writers of America's Edgar as best first mystery novel of the year and remains one of the outstanding winners of that annual honor." – Anthony Boucher, New York Times, 24 Feb 1957

Murder Can Be Fun: "Unless our memory is at fault, this is by far the best thing that Frederick [sic] Brown has done up to this time. It bids fair to be the most ingeniously plotted detective story of the year." – Isaac Anderson, New York Times, 7 Nov 1948

The Bloody Moonlight: "However uncomfortable for Ed [Hunter], for the reader it's exciting." – Isaac Anderson, New York Times, 29 May 1949

What Mad Universe: "…while Fredric Brown is no H.G. Wells, he has dreamed up an amusing and inventive story….Lots of fun." – Jane Cobb, New York Times, 13 Nov 1949 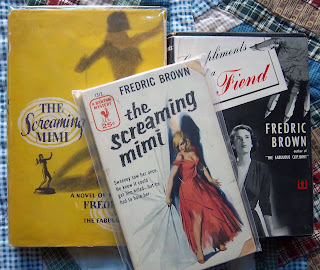 The Screaming Mimi: "Mr. Brown's preceding books have brought him quite an enthusiastic following, and his current one is not going to let anyone down. It is as fast, smooth, and well-plotted as the others – and it centers around a ripper. Mr. Brown manages to convey a goodly amount of the visceral terror an actually ripper would induce in the reader." – Anthony Boucher, New York Times, 27 Nov 1949

The Screaming Mimi: "Treat your menfolks to this one." – Albuquerque Tribune, undated

Compliments of a Fiend: "Purely as a detective story the book is weak. It sags in the middle through a long investigation of blind alleys and is finally solved only because Ed at last takes, on page 195, a logical step which he could and should have taken on page 77. But, as the story of a young man coming of age in Chicago, it is warm and likable." – Anthony Boucher, New York Times, 16 April 1950 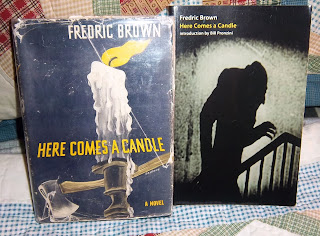 Here Comes a Candle: "This is a psychological novel of first rank – a story as terrifying and tragic to the reader as it was for poor Joe Bailey, whose life it encompasses. It is a bloody, cruel but never depressing glimpse of reality that few authors would dare tackle….It is a brilliantly written biography of frustration. It's closing chapter is a shocker you'll long remember." – Richard L. Blakesley, Chicago Daily Tribune, 6 Aug 1950

Here Comes a Candle: "Ellie Dravich and the beautiful Francy Scott are as lifeless as dressmakers' dummies, so Joe's ultimate choice is simply one of brunette over blonde." – Nelson Algren, New York Times, 13 Aug 1950

Here Comes a Candle: "Comes close to fulfilling this observer's definition of the perfect psychological thriller….On the whole, it's the sort of hand-tailored terror that should redeem your next rainy week-end." – William Du Bois, New York Times, 26 Aug 1950 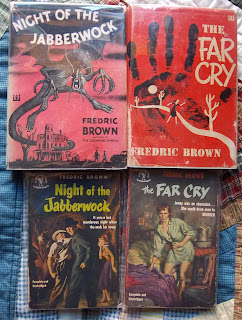 Night of the Jabberwock: "…a zany yarn that's sheer delight….Perhaps, Mr. Brown takes a few too many excursions to Wonderland and wastes too much time at Smiley's bar – but these are pleasant places and once the violence starts, there is swift and varied action until the end. If you are interested in a small-town paper, chess, Lewis Carroll or in a charmingly wacky whodunit, here's your book." – Margery H. Oakes, New York Times, 31 Dec 1950

The Far Cry: "Creative originality becomes, of course, more difficult each year in the detective story; but Fredric Brown manages…to achieve a brand-new plot twist, and to encase it in an unusually solid novel. To hint at much of the plot might rob you of the extremely rare and welcome sensation of pure surprise which I experienced in reading the last chapter (though I could wish that Brown had not pushed on past that surprise to a somewhat too glib and tricky ending). Let me simply say that the book contains a fine bitter study of a bad marriage, an admirable sense of the reality of murder, and a well-sketched background of Brown's home state of New Mexico." – Anthony Boucher, New York Times, 30 Dec 1951

The Far Cry: "I couldn't quite make out what happened. But it's an original all right and a distinct gripper." – Maurice Richardson, The Observer, 19 Oct 1952 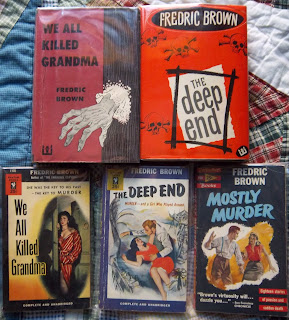 We All Killed Grandma: "Seems not so much a first draft as a hasty attempt to rewrite a pulp novelette to book length. Brown's novels have varied from superlative to disappointing; but hitherto his most uneven stories of murder and of science fiction have at least been startlingly original. This one is simply a standard stock case of arbitrary amnesia, such as only flourishes in murder novels, with action and detection notably absent. I suppose you can't blame Brown for resting his dazzlingly inventive mind; the next one will probably be a honey." – Anthony Boucher, New York Times, 25 May 1952

The Deep End: "The story line is simple (perhaps too much so) and unsurprising; but the high school school hero who is also an unobtrusive mass murderer is an unusually terrifying killer… Sex is plentiful and outspoken enough to please all reprint readers, but honestly written and necessary to the plot; and the sharp prose and narrative movement are Brown at his best." – Anthony Boucher, New York Times, 28 Dec 1952

Mostly Murder: "Those who know only his novels will find the same sharp vigor and individuality here, in neat, tight packages – solid specimens of the top level of pulp writing in the Nineteen Forties." – Anthony Boucher, New York Times, 14 June 1953

Madball: "It's a carnival you'll remember more sharply than any you've attended….But the background is much better than the story, which is burdened by a technically trying effort to write both an 'inverted' story and a whodunit at the same time, a good deal of straining for 'irony,' and enough sex, of assorted varieties, for a half dozen novels." – Anthony Boucher, New York Times, 4 Oct 1943 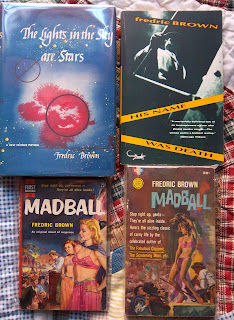 The Lights in the Sky Are Stars: "A muddled piece of futurinalia. Treatment of present day politics is grossly improbable, and to achieve one of those 'arty' endings, Brown alienates the reader from his main character." – Mark Reinsberg, Chicago Daily Tribune, 28 Feb 1954 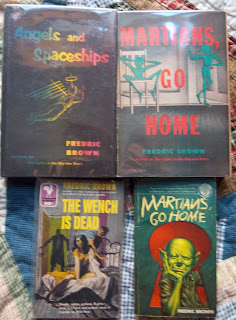 Angels and Spaceships: "Mr. Brown shows that he is also a master of the vignette with the shock, or surprise, ending…..[A]n eminently worth-while acquisition for any reader, whether tyro or fan." – Villiers Gerson, New York Times, 24 Oct 1954

Angels and Spaceships: "Science-fiction at its fascinating best." – Edmund Crispin, The Observer, 31 July 1955

Angels and Spaceships: "…shows this brilliantly fanciful master at his best." – Kingsley Amis, The Observer, 7 Oct 1962

The Wench is Dead: "Despite appearances, don't look for a regular whodunit here; as such it has marked weaknesses….the gratifyingly unconventional story is told with conciseness and bite." – Anthony Boucher, New York Times, 8 May 1955

Martians Go Home: "Doesn't quite reach the hilarity of his What Mad Universe – but let's not be a carping Martian! It's a rare piece of satire." – J. Francis McComas, New York Times, 4 Dec 1955 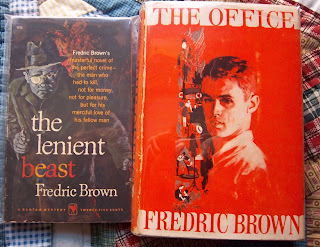 Rogue in Space: "[The character of] Crag is a wooden invention; his story makes so little sense that one wishes it had ended on page 98." – Villiers Gerson, New York Times, 17 March 1957 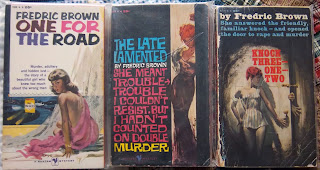 One for the Road: "It's an agreeable enough leisurely story…but its movement is, for Brown, surprisingly unurgent, and the mystery is resolved in an unpardonably chancy manner." – Anthony Boucher, New York Times, 17 Aug 1958

The Late Lamented: "The puzzle is a simple if neat one; but you'll find the spectacle of Ed [Hunter] falling in love even more agreeable than Ed and Am as detectives." – Anthony Boucher, New York Times, 22 Feb 1959

Knock Three-One-Two: "The story, difficult even to hint at, is adroitly unrolled and ingeniously (if maybe too neatly) concluded." – Anthony Boucher, New York Times, 16 Aug 1959 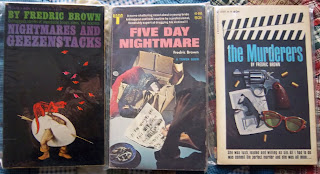 Nightmares and Geezenstacks: "Fredric Brown has the enviable ability to tell an entire short story in approximately the length of this column….Many are criminous, more are fantastic or science-fictional, some are bawdy, and all are at once delightful to the reader and maddening to the rival author who tries to emulate their technique. There's more fun in this small volume than in a half-dozen collections by less miraculously concise writers." – Anthony Boucher, New York Times, 20 Aug 1961

The Murderers: "First half promising. Then gets wild." – Maurice Richardson, The Observer, 18 Feb 1962

The Shaggy Dog and Other Murders: "…contains ten stories from the pulp detective magazines of the 1940's, all ingeniously entertaining and highly professional, and suggesting that we need more unpretentiously good collections from the days when the crime magazines seemed to hit a higher average of storytelling than they do today." – Anthony Boucher, New York Times, 12 May 1963