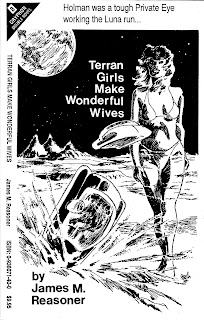 Is there anything that James Reasoner and Gary Lovisi can’t write? I doubt it. These two modern pulp pros have proven their excellence in any number of genres, and this Gryphon Double from 1995 finds the writers spinning a pair of terrific science-fiction stories.

James Reasoner’s Terran Girls Make Wonderful Wives is a sci-fi twist on the hardboiled private eye tradition. Wesley Holman is hired by Ed Donlin to find his missing mail order Earth bride, Shasharra. At first, he thinks it is just a case of a runaway wife, but when Luna’s crimelord starts expressing interest in the case, Holman realizes there’s something more sinister going on. Fast-paced and fun, with the right amounts of action and suspense, Terran Girls Make Wonderful Wives makes for a wonderful story.

"Then the doors of the elevator slid open and a fist rammed into my stomach. Technology notwithstanding, there's nothing like an old-fashioned punch in the gut to get your attention. I doubled over, gasping for air, and slung a blow of my own at the figure who had suddenly appeared in front of me." -- Terran Girls Make Wonderful Wives 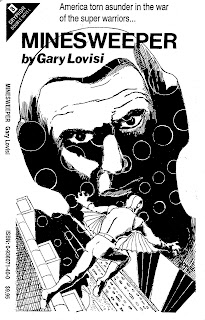 Gary Lovisi’s Minesweeper is set amidst a post-terrorist Earth. The US and the Middle East have razed each other’s societies to rubble. It is a battle of exponentially increasing technology, with each army one-upping the other’s latest deadly innovation. Aaron is a “hunter” in old Times Square, and his job is to detect and diffuse the enemy’s walking suicide bombers. Technology and his skills are put to the test when Talena tells him that not only is a virus slowly degenerating him, but that their dreaded nemesis Rabin is loose in their district. Lovisi’s vision of the future is bleak and paranoid, and it is certainly interesting to read this prescient and terrifying story in light of the events that have happened since it was originally published in 1995.

"Then she was gone, leaving me alone in a crowd of a hundred thousand sweating, traveling citizens, all of whom were oblivious to the fact that someone among them was a walking bomb – a killer of monumental destruction, who at any moment might make the whole Sub-Sector a patch of dust and death to rival hell itself." -- Minesweeper

Raul Garcia Capella contributed the artwork to this edition.
Posted by Cullen Gallagher at 11:45 AM