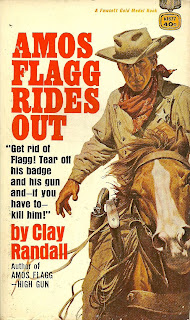 Clay Randall’s Amos Flagg Rides Out was the third entry in the Amos Flagg series, following Lawman and High Gun. While there certain similarities with the earlier books—that same great mixture of Western humor, action, and suspense, as well as the same terrific core cast of characters—Rides Out doesn’t merely repeat the formula. From the start, it’s apparent that a number of things are beginning to change—and not necessarily to the sheriff's advantage—and it is up to Amos Flagg to get things back to normal.

Something’s afoot in Sangaree County. A mysterious Chinese worker that rode into town on the stagecoach has gotten himself involved in a murder, which has the town on the verge of mutating into a riotous lynch mob. Meanwhile, Amos Flagg’s once-loyal deputy, Evan R. Webb, is now running against him in the upcoming election. Also, Webb suddenly has both the political and financial backing of a local religious group. And hiding amongst this group are two suspicious individuals who seem to shy away whenever the Sheriff is near.

If that isn’t strange enough, Amos Flagg’s father—the notorious outlaw Gunner Flagg, who spent most of his life either in jail or eluding the law—is now his son’s only deputy. 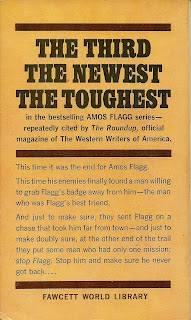 Amos Flagg Rides Out is a much more involved and complex story than either of its predecessors. There are numerous intersecting subplots and a lot of shifting between different characters’ perspectives. Clay Randall makes it all seem so effortless, however, and despite the intricate structure the novel reads very clearly.

Rides Out is also a lot more political than either Lawman or High Gun. Much of the drama revolves around issues of the separation of church and state (or the lack thereof), campaign funding, lobbyists, and false political promises. These are issues that are just as relevant today as they were back then. (Ed Gorman does a terrific job writing about some of these issues in modern politics with his Dev Conrad series.) Clay Randall also discusses the mob mentality, and racial and gender prejudices, in American society. Liz Caroline, local saloon owner and Amos Flagg’s paramour, says it best:

“Some folks don’t need a reason to hate. They do it as natural as breathin’…You ask a saloon girl about it sometime. Of course, we usually get it from the ladies of the town, and from ones like Genthe, but I guess we know nearly as much about that kind of hate as Ah Chee does.”

While I was disappointed that Amos Flagg’s cat, El Cazador, didn’t play as a strong a role in this book, one character I was glad to see get a much more prominent role is Amos’ father, Gunner. He’s changed a lot since his first appearance in Lawman, when he was fresh out of prison and on his way to Sangaree to rob the local bank. In High Gun, Gunner was a kindler, gentler outlaw, but his scheming mind was still thinking along crooked lines. Now, in Rides Out, he seems to have genuinely reformed and is trying to repair his relationship with his son (without making it too obvious).

“The old man heaved a long, silent sigh. He could no more erase a misspent lifetime than Amos could forget it. From time to time the old bitterness would boil over. Gunner accepted it. That was one advantage to age—learning to accept fact.”

On the surface he still plays the hardcase, the ex-con with nothing but contempt for law and civilized society. But when his son needs help, Gunner steps up. Amos, however, isn’t so quick to forgive and forget. The father-son conflict is very subtly written, and one of the most effective and compassionate parts of the Amos Flagg saga.

All in all, another terrific Gold Medal Western from Clay Randall (aka Clifton Adams), who is fast becoming one of my favorite writers. Great stories, strong characters, swift pacing, with nice doses of action and humor – the guy knew how to write a damned good book.
at March 27, 2011