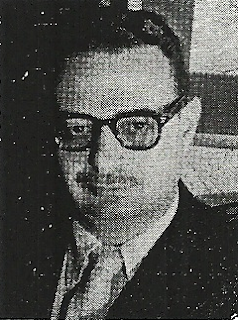 Clifton Adams was born December 1, 1919 in Comanche, OK, and he passed away due to a heart attack on October 7, 1971 in San Francisco, CA. The author of nearly 50 books and over 125 short stories, it is truly a shame that he died so young at age 52. He was still in his prime as a writer, having just won two consecutive Spur Awards for Best Western Novel from the Western Writers of America, first in 1969 for Tragg’s Choice and in 1970 for The Last Days of Wolf Garnett. He had also recently been named “Oklahoma Writer of the Year” in 1965 by the University of Oklahoma, his alma mater. In addition to his own name, he also published under the pseudonyms Clay Randall (the excellent Amos Flagg series of Westerns), Jonathan Gant, and Matt Kinkaid (sometimes spelled Kincaid). 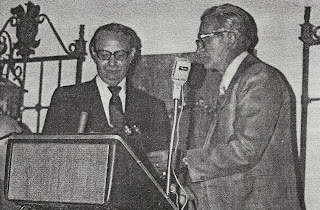 Clifton Adams (left) accepts the Spur Award for Best Western Novel for The Last Days of Wolf Garnett from another legendary Western writer, Lewis B. Patten (right) (image courtesy of The Roundup, Vol. XIX, No. 7, July 1971)
In honor of Adams’ legacy, I will be posting reviews of two of his earliest Western novels for Gold Medal, The Desperado (1950) and A Noose for the Desperado (1951). I’ve also collected a few links to articles about Adams’ work, as well as uploaded scans of a rare obituary and remembrance, as well as an article by Adams on his favorite hobby – cooking!

The Critics on Clifton Adams:
"Pure narrative vigor is the great virtue of Clifton Adam's Whom Gods Destroy…There's a certain flaw in the psychological build-up of the criminal protagonist: he seems simply not to have existed between the ages of 18 and 32. But if you can bridge this gap, he's a well-conceived louse, depicted with an objective absence of creampuff sympathy; and familiar though the essentials of the story may be, it moves with an irresistible forward impetus." –Anthony Boucher (New York Times, May 3, 1953)
"Killer in Town is Clifton Adams' rousing good story of how far a man may go out of regard for the past, and what can also come of it." –Nelson Nye (New York Times, March 13, 1960)

"Stranger in Town by Clifton Adams is a sample of what can happen when the law breaks down. Told in hard-hitting prose, authentically colored and crammed with suspense." –Nelson Nye (New York Times, July 10, 1960)

When Oil Ran Red: "A grim, almost completely chuckleless story of how oil drowned out the cattle industry in Oklahoma to the tune of bloody gunplay and violence. A sombre romance and a startlingly unexpected ending add to the tale's tragic undertones. Recommended as an exciting, clean-cut picture of the development of one great industry at the expense of another." –Al Chase (Chicago Daily Tribune, July 5, 1953) 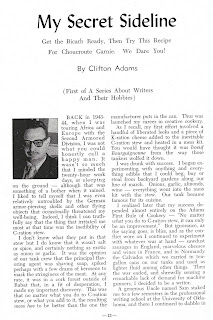 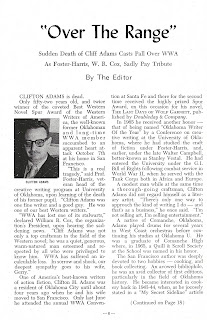 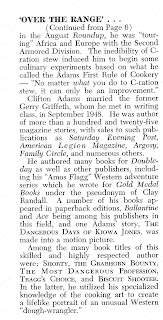 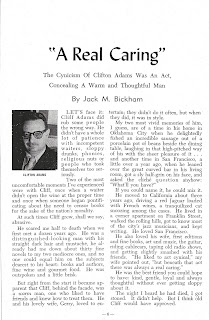