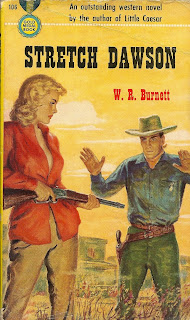 W.R. Burnett’s Stretch Dawson was published in 1950. #106, it was not only the eighth book published by Gold Medal (since the numbering began at 99), but it was also their first Western. At the time, Burnett was the biggest name to appear in the Gold Medal line up to that point. His first success was the gangster epic Little Caesar in 1929, and after that he continued to appear in hardcover, while also penning some terrific movies in Hollywood. The year before Stretch Dawson, Knopf published a hardcover edition of The Asphalt Jungle, which would become one of the best film noirs by John Huston the following year.

Stretch Dawson is the leader of a band of outlaws that crawls its way out of the badlands only to find themselves trapped in a ghost town with an aging miner and his gun-toting granddaughter (curiously nicknamed “Mike” because of her tomboy image). Right away, Stretch finds himself torn between his gang, who wants to steal the old man’s gold, and his affection for Mike, who is equally conflicted between her loyalty to her grandfather and her newly awakened sexuality. 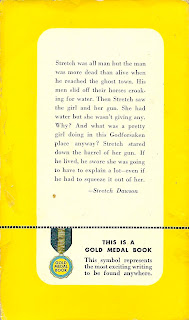 With its swift moving plot and stirring action, Stretch Dawson is an entertaining and worthwhile read. The first third is very strong, especially the opening horse chase through in the badlands, as well as the tense run ins with the trigger-happy granddaughter; the second third hits a slump with too much dull romance (Stretch’s male magnetism and Mike’s swooning are too one-dimensional), but the book finishes up with a solid finale and a rousing gunfight. It isn’t the best Burnett that I’ve read (the Stark House double with It’s Always Four O’Clock and Iron Man are both superior), but it still stands out as an interesting facet of Burnett’s career.

Hollywood made a terrific movie out of the book called Yellow Sky, which was directed by the legendary William “Wild Bill” Wellman and adapted by Lamar Trotti. As good as the book is, this is one instance in which the movie is better. The location shooting in Lone Pine, California looks beautiful in black-and-white, while Death Valley has never looked so desolate. Also, the stellar cast really brings the characters to life. Gregory Peck finds the right balance of charm and darkness as Stretch; Stretch’s rival is played by Richard Widmark, one of my favorite actors, and certainly one of the best villains in film history; and Anne Baxter’s Mike is tougher and less naïve than in the book, and just as ruthless as Stretch, which makes her character more interesting. 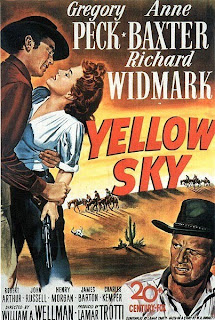 “That blasted gold’s harder to get at than a nun in a convent. From here on in, I stick to bank robbing.”

“Fears and suspicions chased each other through his mind like rats behind a wainscoating. Nervousness grew in him and he began to shake. All at once he took himself in hand, disgusted at the state he was in.”

“Savage shouts rose near the top of the lower slope, then a ragged volley crashed out with stunning violence in the still desert night, and buzzed around the house like a swarm of bees, thudding into the adobe walls and the stout wooden posts, which shuddered under the impact.”
at November 30, 2010