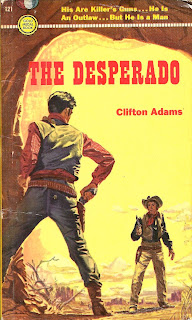 Clifton Adams’ The Desperado was one of the earliest Westerns in the Gold Medal roster. It's also one of their best that I've had the chance to read. Published in 1950, it is number #121 – taking into account the imprint began at #99, this would be their 23rd book. The novel is set immediately after the end of the Civil War, when carpetbaggers and the Yankee army are overrunning Texas. Talbert Cameron, also known as “Tall,” is only nineteen, but already he is on the run. After taking a few swings at a Yankee, he and his friend Ray Novak find themselves hitting the trails to avoid the work gang. But when Tall hears word that the Yankees are roughing up his family and friends, he must decide whether to keep running, or to risk being captured or killed in the name of vengeance.

The Desperado is a gripping novel, and Adams finds the right balance between Western action and a coming-of-age narrative set amidst the social upheaval in the aftermath of the Civil War. This context is more than just background, however, as it becomes a prime motivating factor for the characters and their actions. Circumstance compels Tall to make decisions he would have otherwise never made. As Tall explains, “I hadn’t asked to get in trouble. It was like playing a house game with the deck stacked against you. The longer you played, the harder you tried to get even, and the more you lost. Where would it stop? Could it be stopped at all?” The cosmic injustice of this passage would not be out of place in a Noir crime novel, and it makes me think of the average joes of Harry Whittington or Day Keene who, because of circumstance, are turned into criminals on the run.

Adams brings a unique and interesting perspective to The Desperado. Tall and Pappy Garret, the notorious fugitive who becomes Tall’s mentor and friend, may be outlaws, but they aren’t criminals in the normal sense. They kill out of self-defense, they draw fast and shoot quicker than the next guy only so they can live to fight another day, but never for their own gain. “Most men got something out of their crimes… Men like me and Pappy, we didn’t get anything.” 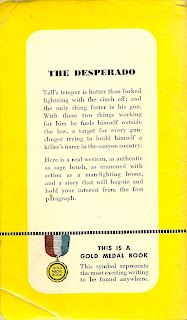 The relationship that develops between Tall and Pappy is really quite touching, and it speaks to Adams’ gift as a writer that he can switch gears so smoothly between thrilling gunfights and reserved and tender moments between the two outlaws. Their shared moments are always sincere and never cloying, perhaps because Pappy is wise enough to leave the most significant lessons unspoken, while Tall is still young enough that he doesn’t quite understand the importance of what Pappy is teaching him. Tall thinks that Pappy is just passing along the tricks of the gunfighter trade – how to pull back the hammer and draw in a singular motion – but really he is imparting the importance of unequivocal trust between two people. Whenever Tall meets people from his past, they can never recognize the person they used to know, whereas Tall and Pappy seem to have an implicit understanding of one another, because only they can see beyond the prices on their heads and the notches in their guns.

The Desperado delivers exciting Western action, well-rounded and sympathetic characters, and a spellbinding story. Adams continued Tall’s story the following year with A Noose for the Desperado, a novel even more touched by Noir overtones than its predecessor. A review of the sequel will follow later this afternoon.

Adams was born December 1, 1919 in Comanche, OK. Before becoming a writer, he was a drummer and also spent time in the US Army, where he was a sergeant and received five battle stars. He passed away on October 7, 1971.

Here are a few of my favorite quotes:

“Bad pistols are like bad friends. They let you down when you need them most.”

“I backed up and swallowed to keep my stomach out of my throat. I hadn’t known that a man could die like that. Just a flick of the finger, enough to pull a trigger, and he’s dead. As easy as that. The night was cool, almost cold, but I felt sweat on my face, and on the back of my neck.”

“I felt an emptiness inside me. A kind of hopelessness. I felt as if I had cut away the very last remaining tie to the kind of life I had known before. This was living like an animal, killing instinctively like an animal.”
at December 01, 2010