The final day of NoirCon got off to a spectacular start with Fantomas at 99: The Lord of Terror, a panel about the famed French arch-criminal that has appeared in numerous books, comics, and movies over the past century. Panelists Howard A. Rodman and David White detailed not only the rich heritage of Fantomas, but also the many possibilities the future holds for the figure, who continues to appear in books and movies (including White's own novel, Fantomas in America).

Fantomas began as a serialized novel in 1911 by Marcel Allain and Pierre Souvestre. The cheap publication was similar to the pulp magazines in America around the same time. They continued to write these 100,000 word issues at the rate of one a month for two years straight. White and Rodman revealed that the reason why Fantomas had two protagonists who were after the arch criminal, Inspector Juve and the journalist Fandor, was that Allain and Souvestre to each write about one character, which sped up the process. The two writers would spend 1 week plotting, 2 weeks on their own writing, and then 1 week combining their writing into the finished product. 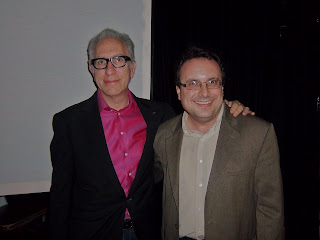 Howard A. Rodman and David White

Rodman and White showed stills from the many Fantomas movies, including the famous silent serial by Louis Feuillade from 1913; a lost American serial made in the early 1920s; Paul Fejos' sound version from 1932; Fantomas Against Fantomas, which is from 1949 and set in a castle owned by the SS; and this curious surrealist short called Monsieur Fantomas, which was made by Ernst Moerman in Belgium in 1937. The panelists said the short was online, and low and behold it is!
Monsieur Fantômas (1937)
The final event of NoirCon was called the Last Call Panel, which featured authors William Lashner, William Boyle, Jon McGoran, and Lawrence Light. They began with a discussion of one topic they felt had been missing from the 4-day event: humor. As Lashner said, "The less in life your expectations have been met, the more necessary humor is to keep you from going insane." He also revealed that "serious sex scenes frighten me," which got the audience laughing. This led into a discussion of sex in noir fiction ("I think some people should do it, and some people shouldn't," according to William Boyle ), followed by a look at different perceptions of villains. Scott Phillips, from the audience, cracked everyone up with a story about his evil dentist who once made him get a root canal without any anesthetic. When Phillips would cry out in pain, the doctor would remind him, "It can't possibly hurt!" To end the event, Lawrence Light told a rousing Irish yarn about how all it takes is one goat to ruin a man's reputation. Overall, the candid panel was lively and engaging with lots of interaction with the audience, a great ending to NoirCon 2010.