Day 2 of NoirCon 2010 ended with a great, low-key hang in the lobby of the Doubletree Hotel. Now, that made getting up for Day 3 a little tough on only 4 hours of sleep, but it was well worth it for Keynote Speaker Joan M. Schenkar's Lady in the Dark: As Noir As it Gets, a slideshow presentation on Patricia Highsmith. The author of The Talented Miss Highsmith: The Secret Life and Serious Art of Patricia Highsmith wittily began by saying, "What could be more noir than a hungover writer trying to address an audience during breakfast?"

"You can take the dark out of night, but you can't remove the noir from American society," said Schenkar. The presentation revealed how the enigmatic author's life often mirrored her own duplicitous, peculiar characters -- sometimes eerily so, such as how Highsmith repeatedly set murders in her books in the real life locations of her lovers' homes. Love and murder are inextricable in Highsmith's work, Schenkar maintained. Both are described as "a pursuit and a capture," and even while even Highsmith's The Price of Salt may have the distinction of being her only book without a murder, Schenkar insightfully pointed out how many of the metaphors involve bullets or other violent acts, leaving a subtle shade of death on every page.

Other quotes that have stayed with me are: "She was always in disguise. Misdirection was her middle name"; "She wasn't a crime writer -- she was a punishment writer. She was really concerned with how murder affects the murderer"; and "She inspected human like a martian on high." 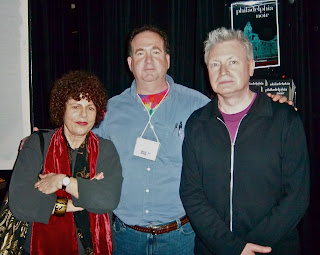 Noir Scholars: Joan M. Schenkar, Lou Boxer, Robert Polito
Up next was another Highsmith-related panel: "Patricia Highsmith at the Movies" with Rich Edwards and Thomas Kaufman. Focusing just on the Ripley adaptations, the two panelists used clips and frame enlargements to show how filmmakers used cinematic compositions to represent the complexities of the Ripley character. The films they focused on were Purple Noon (1960), The American Friend (1977), The Talented Mr. Ripley (1999), Ripley's Game (2002) and Ripley Under Ground (2005). Despite feeling that "the movie adaptations lack the audacity and perversity of the original novels," both panelists made strong cases for the artistry of all the adaptations. 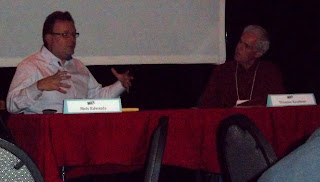 Rich Edwards and Thomas Kaufman
Next, Megan Abbott and Anthony Neil Smith took the stage for Through a Rearview Darkly: A Revisionist History of Noir. Abbott and Smith are not only stellar fiction writers, but both have a deep, scholarly understanding of literature, and they have Ph.Ds to back it up. Their focus was on the contentious fascination of noir writers with the 1940s and 1950s. They dared to ask how we can represent those areas without falling into pastiche or cliche. Smith and Abbott cite Walter Mosley and James Ellory as two of the first (and most influential) writers who began to re-examine the classical noir age through different lenses. This was one lively discussion, with some participants arguing that writers shouldn't fetishize the post-war Los Angeles area anymore, while others maintained that the city's importance in the evolution of noir literature makes it an important focal point to return to. 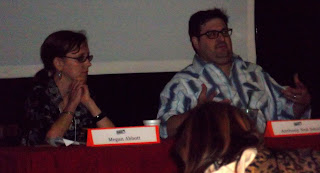 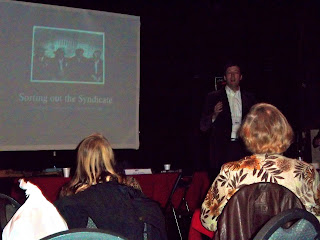 John Buntin
Next up was the panel Damn Near Dead 2: Live Noir or Die Trying!, based around the upcoming anthology from Busted Flush Press. A number of authors took the stage: Patti Abbott, Scott Cupp, Christa Faust, Scott Phillips, S.J. Rozan, and Reed Farrel Coleman. After the authors described their stories and how they got involved with the anthology, they all shared memories of late Busted Flush Press founder David Thompson. The audience shared their own stories about David, which made for a warm and endearing memorial.

Christa Faust, Scott Phillips, S.J. Rozan, Scott Cupp, Patti Abbott, and Reed Farrel Coleman
The final panel of the day was Reality and Noir, with Wallace Stroby and David Corbett. The authors discussed the need to make the criminal element both more realistic and human. Stroby used his experiences as a journalist (including a tense but hilarious dinner with the New Jersey mob to honor the retirement of a fellow reporter who covered organized crime), while Corbett shared many stories from his days as a real Private Investigator. "Evil is paying the bills," Corbett memorably said, explaining that "for the most part we represented the bad guys." Corbett also offered the following wisdom: "Number one rule of criminal defense: snitches lie." He and Stroby also advised never to hire a convicted felon for a locksmith -- apparently, it is a popular occupation for felons that want to go "straight." 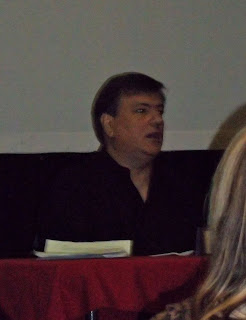 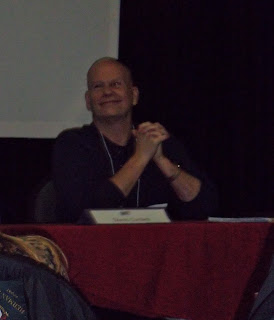