Last week I posted some thoughts on six stories by Talmage Powell that I purchased from the Vintage Library. This week I dropped by the site again and got a few more. Here are some brief notes and synopses of them. 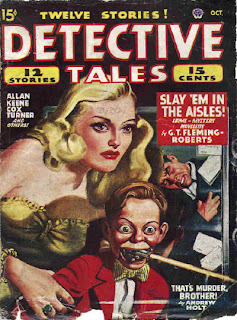 “Rub Out Inn” (Detective Tales, Oct. 1947) – Powell places more emphasis on anticipation than action—and the alchemy works wonderfully. A terrific story that takes over the course of a couple hours one rainy night in the backwoods of Georgia at Joe’s Eats and Cabins. As the proprietor watches as a young girl arrive with a much older man, he knows trouble is just around the corner. A couple of hours later, trouble arrives. This is a story written between the lines: Joe’s world-weary cynicism and the girl’s foolhardy desperation to escape (even when she knows that the road won’t lead anywhere good) is implied rather than spoken, showing Powell’s command of subtlety.

"Blood was running down the side of her face. Maybe, though Karambalis, she thinks the wetness is all rain. Maybe she doesn't know it's blood." 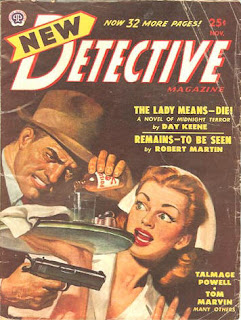 “So Little Crime” (New Detective Magazine, Nov. 1948) – A corrupt cop’s allegiance to the local mob boss is tested when his daughter finds herself in the way of a wanted man and some missing plans that would incriminate the mob. Powell puts an original spin on the “bad guy with a good heart” archetype: the cop, Carmody, shows little remorse about his illicit behavior. He has no illusions about what he is doing, evinced by his self-destructive drinking and alienating attitude towards his co-workers and family. Even at the end, Carmody realizes that he is beyond redemption, and has dug his own grave no matter what choice he makes. As I’ve noted in other stories, Powell has the tendency to end his stories before his characters hit rock bottom—the worse is still to come for them.

Overall another well-done story with a compelling lead character and an exciting narrative. My one criticism is that the end of the story feels rushed. Details come flying too quickly, as though Powell was cramming a longer story into a small space. Perhaps the idea was intended as a novella, or even as part of a novel, as there seems to be room for extrapolation. Even so, ending the story and wanting more isn't always a bad thing, as it can be a sign that the writer has succeeded in pulling you into their world, and this is what Powell has accomplished.

"He sat down on a high leather stool in the dim-lighted place and began drinking. For long minutes Carmody grinned and drank with all the cheerful determination he could muster. He was drinking like a man trying to kill himself." 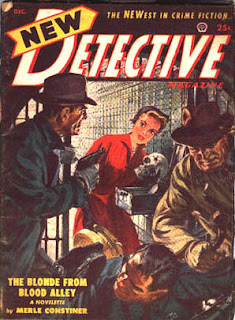 “Killer Be Good” (New Detective Magazine, Dec. 1952) – Doug Townsend is an investigator for the District Attorney. He’s not really a bad guy, but he works long hours, fudges the books slightly to make a little more cash, and that doesn’t leave much room for his wife. He finally realizes all of this when someone shoots him point-blank in the head. What the killer doesn’t know is that he survived, and he won’t settle for death until he finds out who pulled the trigger.

The pacing is off on this one. Solid opening, and intriguing concept. But Powell takes his time, devoting too much space (nearly half the story) on building Townsend's anxiety, and then revealing both the red herring and the denouement too quickly at the end. At moments Powell’s drive is there, and I really like Townsend’s increasing self-loathing, but somehow the story lacks guts.

"The last prop beneath my world was shattered completely, I might possibly have accepted oblivion right then; but oblivion failed to come. If this were death, then death was far from oblivion."