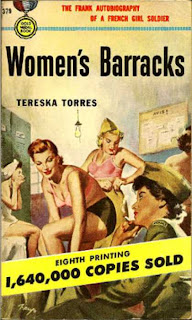 But what do we mean when we call a book “dated”? The label suggests some sort of change in reception or perception, but I think it is more than just a value judgment. It is also saying that something is so tied to the time period in which it was created that it can’t be fully understood or appreciated outside of that context. Rather, for better or for worse, the time period says more about the work than the work says about the time. In my opinion, this is the case with Tereska Torres’ Women’s Barracks, originally published by Gold Medal books in 1950 and reprinted by CUNY’s Feminist Press in 2005 as part of their Women Write Pulp series.

Reading it in now, at first there didn’t seem to be much beyond the racy-for-its-time factor: the hetero- and homosexual lives of women involved in the Free French Forces during World War II. Like a gossipy diarist, the first-person narrator recounts the amorous adventures of the women she lived and worked with. Despite the wartime setting, the story is rather soapy, with most of the novel taken up with introspective observations that drag on with too much detail and too little action. “Show, don’t tell,” might be a cliché, but it would have improved Women’s Barracks considerably. We’re told so much about the characters, but little of it actually happens. The effect is a largely un-engaging narrative. 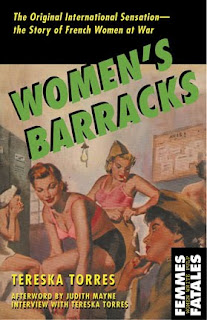 However, the CUNY reprint includes an interview with Torres by Joan Schenkar and an afterward by Judith Mayne. These additions made me see the book in a different light, and I wish I had read them before attempting the book on its own. Schenkar and Mayne detail the story behind Women’s Barracks, its relation to Torres’ own work with the Free French Forces (the book isn’t quite an “autobiography” but it is grounded in her own experience), as well as its publishing history. Despite whatever suspicions we may have about Gold Medal’s own prurient interest in the book, Torres claims that the sexual nature of the story was of her own doing, and she didn’t receive any pressure to “spice” it up. The book was not only highly controversial when it came out (even attracting the negative attention of a congressional committee) but also influential. As Ann Bannon (author of Odd Girl Out) remembered, “Tereska Torres’ Women’s Barracks showed me a writer who didn’t just write about women in uniform. She made me realize what they might have been doing with each other in their off hours and it took my breath away.” 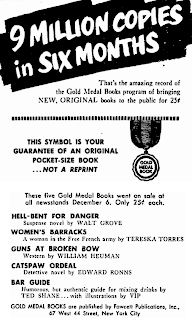 Jay Walz wrote an article on the controversy, “Publisher Defends Lurid Paper Books,” which was published in The New York Times on Dec. 2, 1952. Walz summarized the defense to the Select Committee on Current Pornographic Materials made by Ralph Daigh, the editorial director of Fawcett Publications (who owned Gold Medal). As paraphrased by Walz, books like Women’s Barracks “went no further in sensuality and misdeed than did Homer, Plato and Shakespeare.” Daigh also saw the books as “reflecting the life and times of this generation. Such books should be published and made freely available.” Only three years into its existence, Daigh reported 43,149,063 total Gold Medal paperbacks sold—a high number that surely displeased those shocked and repelled by their offerings. The committee counsel, H. Ralph Burton, even went so far as to say that Women’s Barracks “contain[ed] passages he could not quote in a public hearing.” Other articles of the time report that Torres' book was even investigated in Canada.

Schenkar and Mayne make a convincing argument for the book’s cultural importance in that, as the first lesbian paperback for Gold Medal, it would pave the way for Vin Packer, Valerie Taylor, Ann Bannon, and many others. This background info doesn’t make it a better novel, but it does help put the book, and more importantly its time, in perspective.
at April 27, 2010