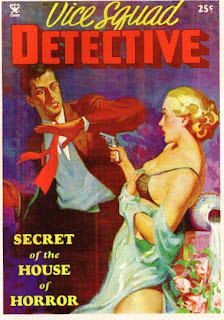 “Nudist Gym Death Riddle” is a hall of fame pulp title. Seventy-five years after it first appeared Vice Squad Detective in 1935, it still makes you stop and say, “Wow.” So, on those grounds, I’d say it is a pretty damn effective title.

The story is as over-written with pulpy purple prose as you can imagine, and the writing and pacing is undeniably sloppy, but what a wonderful, libidinous mess it is. Unrestrained tastelessness abounds as private eye Ace Lansing joins a nudist cult in order to find out what they are really up to behind closed doors… It all has something to do with blackmailing, but those sort of technicalities are minor compared to the detail in which writer Jack Gray describes the various members of the cult and their “goings-on.”

Ok, so the story sort of stinks, the gender and racial politics are outdated, and Jack Gray won’t be winning a Nobel for this, but I gladly read “Nudist Gym Death Riddle” from beginning to end. It was meant to shock and deliberately appealed to salacious tastes, and that is exactly what it does.

According to Frank M. Robinson and Lawrence Davidson’s Pulp Culture, Vice Squad Detective magazine barely appeared for one issue. Police seized most of the copies before they hit the newsstands because of the racy content. It was published by Graphic Arts, a company based out of Minneapolis, MN. According to Robinson and , the issue was released in 1934, but Galactic Central lists it as 1935 and cites an article from Author & Journalist. Because of the controversial content of the magazine, and the scant information available on the author (not to mention his bland name), it is probable that “Jack Gray” is a pseudonym.

For those curious, there is an original copy of the magazine for sale on eBay for $1800 dollars. Well, I won’t be bidding on that one any time soon, but Vintage Library is selling a reprint for a modest and more reasonable price. PulpGen also has a PDF of just "Nudist Gym Death Riddle" available to download for free.

Here is a list of the stories that appeared in the one and only issue of Vice Squad Detective: