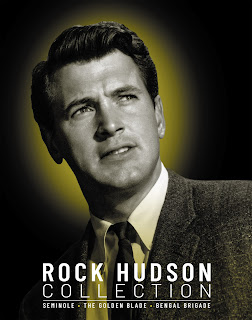 Before he was the debonair leading man in Doris Day rom-coms like Pillow Talk (1959) and Lover Come Back (1961), and before his commanding performances in Douglas Sirk’s melodramas like All That Heaven Allows (1955) and Written on the Wind (1956), Rock Hudson was a man of action, portraying rugged characters in a variety of genres. Hudson’s star persona was quite diverse, capable of channeling the suave charm of Cary Grant, the physical dynamism of Burt Lancaster, or the soft-spoken intensity of Gregory Peck, often in the same role. And it’s this versatility that makes Hudson’s body of work so rewarding: he could lend his talents to such starkly different movies, from light hearted comedies and war pictures to heavy dramas and outdoor adventures, and be just as convincing in each of them. 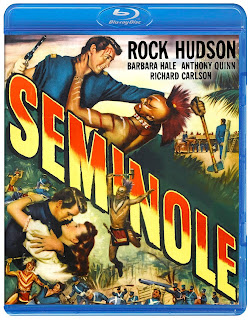 These are three of Hudson’s earliest starring roles, after break-out supporting roles in Anthony Mann’s Bend of the River (1952) and Budd Boetticher’s Horizons West (1952), and it was only a couple years before that when Hudson was still playing bit parts, like a Native American in Mann’s Winchester ’73 (1950) or an unnamed “upper classman” in Air Cadet (1951). The movies collected here are essential for understanding Hudson’s development as a star, as these were the movies that introduced audiences to him and built a screen rapport between him and viewers. These three movies also only represent a third of Hudson’s output between 1953 and 1954: during these two years, he’d release 9 feature films, which means hardly more than a couple months would go by without a new starring vehicle for the actor. A contract player at Universal, the studio kept him very busy on their own lot, and occasionally lent him out to other studios such as RKO or Columbia. The films here are all Universal productions.

The gem of the set is Seminole, Hudson’s second film on which he received first billing, and which was directed by the great western auteur Budd Boetticher. Here, Boetticher shifts his frontier vision from the west to Florida, where Hudson plays Lieutenant Lance Caldwell, who is on trial for the murder of a fellow soldier. In a flashback, he recalls his attempt to keep the peace with the local Seminole tribe, under leadership of Osceola (Anthony Quinn), against the efforts of Major Harlan Degan (Richard Carlson), who is intent on wiping out the local population.

The film looks absolutely gorgeous, and Kino’s new Blu-ray highlights the majesty and richness of Boetticher’s visuals, partially shot on-location in the Everglades. The film is also notable for how it sits alongside other politically progressive western and frontier films of the early 1950s, like Delmer Daves’s Broken Arrow (1950) and Anthony Mann’s Devil’s Doorway (1950), which were sympathetic to the plight of Native Americans and the injustices done to them by American government and military forces. 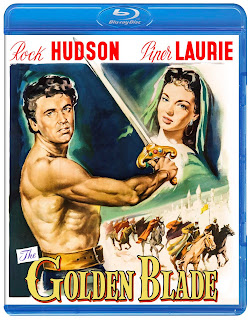 The Golden Blade is a bit of an Arabian Nights-style fantasia, a dazzling display of widescreen exotica glittering with colorful costumes, sweaty muscles, and athletic swordplay. Hudson plays Harun, whose father died in battle and placed a medallion around the killer’s neck.  Harun later finds a mystical golden blade in a market whose powers are unlocked only in Harun’s hands. Meanwhile, the Caliph’s advisor, Jafar (George Macready), is trying to marry his own son, Hadi (Gene Evans), to the princess (Piper Laurie). With the help of the special sword, Harun must save the princess and avenge his father.

The Golden Blade seems in the swashbuckling, Burt Lancaster vein, even though Lancaster never made a Middle Eastern adventure like this. The movie emphasizes Hudson’s physicality, and he’s terrific in the role. The plot is a bit messy, but it’s more of an excuse to indulge in opulent costumes and sets. What also lifts the movie up is its strong supporting cast: Macready is villainously brilliant, as usual, and Piper Laurie and Gene Evans are fabulous and bring a lot of character and personality to their roles.

Bengal Brigade is set in the mid-19th century when Indian was still under British colonial rule. Hudson plays Capt. Jeffrey Claybourne, who defies orders and leads a charge against the rebels in order to save his company of Indian soldiers after he discovers they were led into a trap and left to die. Disgraced at a court martial, Claybourne resigns from his post. Meanwhile, the rebel leader hears of Claybourne’s devotion to his Indian troops and tries to sway him to join a revolt against Colonial powers. Claybourne agrees, but is later rejected when the rebels question his loyalty. Loathed by both sides, Claybourne must decide who to help when he learns of an impending coup. 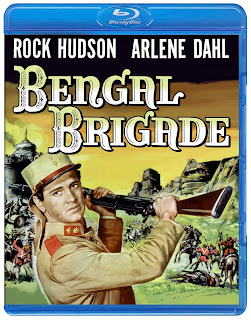 In the course of the movie, all sides of Hudson’s star persona are called upon: the physical, the dramatic, and the romantic (his love interest is Arlene Dahl). His performance certainly outweighs the material he’s given to work with, which seems confused in its intentions. At times, Bengal Brigade can be somewhat of a head-scratcher—it starts off with a strong battle scene, and then shifts gears to be more dialog-driven and concerned with politics, as Claybourne repeatedly rejects how the British military dehumanizes its Indian soldiers, and even briefly sides with the anti-colonialist rebellion. But by the end, the politics are so muddied that the movie has no clear message, and shifts back to the action-side of things with an incredibly atmospheric, fog-enshrouded finale. But Bengal Brigade was not meant to be a message movie: it’s a widescreen spectacle of sword-and-rifle exotica meant to exploit its strapping, broad-shouldered star, and in this regards the movie succeeds.

Also worth noting is that Bengal Brigade was directed by Laslo Benedek, a Hungarian-born director who started as a cinematographer at Berlin’s famed UFA studios in the late 1920s and early 1930s before fleeing the Nazis. In Hollywood, Benedek directed Fredric March in Death of a Salesman (1951), for which he won a Golden Globe for Best Director, and Marlon Brando in his iconic role as The Wild One (1953).

Overall, The Rock Hudson Collection from Kino Lorber Studio Classics presents a fascinating look at the development of one of 1950s Hollywood’s most iconic stars, showcasing lesser-known films that greatly attributed to his fame and the creation of his beloved screen image.