Confessions of a Record Fiend: Part 1 of an on-going series

Recently, I decided to go back into the world of vinyl. At the end of May I bought a record player as a reward for finishing a writing project, and have been enjoying record hunting throughout New York City. I try to limit myself mainly to the cheapo bins, and so far I've had some incredible scores. My latest one was last week. 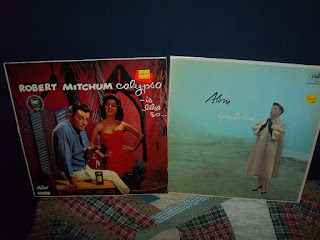 I couldn't believe my luck, as I found two of my dream LPs, both in great shape: Judy Garland's Alone and Robert Mitchum's Calypso Is Like So. 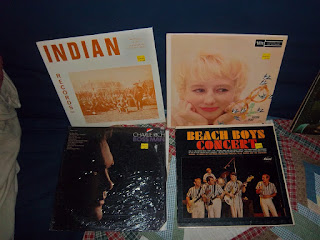 I was also psyched to find 12 Northern Cheyenne Songs, Blossom Dearie's Once Upon a Summertime, Charlie Rich's Boss Man, and Beach Boys' Concert. 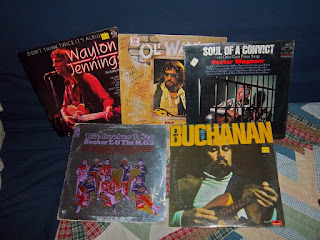 I could still hold a few more records in my arms, so I added Waylon Jennings' Don't Think Twice It's Alright (his earliest recordings) and Ol' Waylon, Porter Wagoner's Soul of a Convict and Other Great Prison Songs, Booker T. and the MG's The Booker T. Set, and Roy Buchanan's That's What I'm Here For.

Today's plan? Clean 'em up and start listening to them!

There's a 25 cent record sale tomorrow, as long as it doesn't rain. Hoping for another great vinyl score adventure there.
Posted by Cullen Gallagher at 12:19 PM