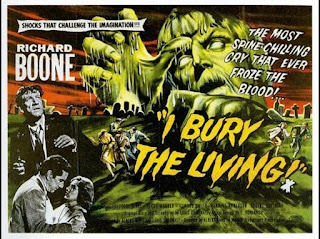 Today is the birthday of Richard Boone (June 18, 1917 - January 10,1981), who has become one of my favorite actors. More often than not, he was the name beneath the title, a supporting player to someone with more star power. No matter how big or small the role, however, Boone definitely made an impact. A tremendous actor who was always convincing in his roles, he had a physical presence, cool intensity, and calm yet stern voice that was unmistakable. He was perfectly at home in westerns, which gave him a stage to show off his ruggedness and quick-witted intelligence.

He appeared alongside Randolph Scott in Ten Wanted Men and The Tall T, with John Wayne in The Alamo, Big Jake, and The Shootist, as well as in Hombre, Man Without a Star, The Raid, Rio Conchos, Madron, God's Gun, and many other movies. Among his most prominent roles was as the star of the television series Have Gun - Will Travel, where he played the lead role of Paladin, the man-in-black bounty hunter who was equal parts gentleman, scholar, and 100% badass.

It was a great surprise to go through a cheapo DVD horror compilation a few days ago to discover a movie called I Bury the Living form 1958 that starred Richard Boone. I had never heard of it before and was unaware I even owned it, but I was excited to see that he had the lead role.

Boone plays the newly-elected director of a cemetery who makes a startling discovery. The graveyard map in his office has the power to kill. By accidentally changing the pin from white to black, Boone unwittingly sends several of his clients to an early grave. After experimenting with several other pins, Boone is convinced that he is cursed, and he begins his downward spiral into depression and madness.

The movie is certainly a low-budget production, runs only 76 minutes and is confined mainly to one interior set, but I love and admire B movies precisely for their economy and inventiveness. And while the concept may be on the hokey side, it is Boone's rock solid demeanor and strong acting abilities that elevate the movie and save it. He's great, and imbues the character with conviction and emotion. His breakdown, in particular, is a remarkable performance. The last twenty minutes of the whole movie, in fact, are terrific, with some wonderfully surreal visual effects.

Posted by Cullen Gallagher at 4:05 PM