"The Last Days of Wolf Garnett" by Clifton Adams 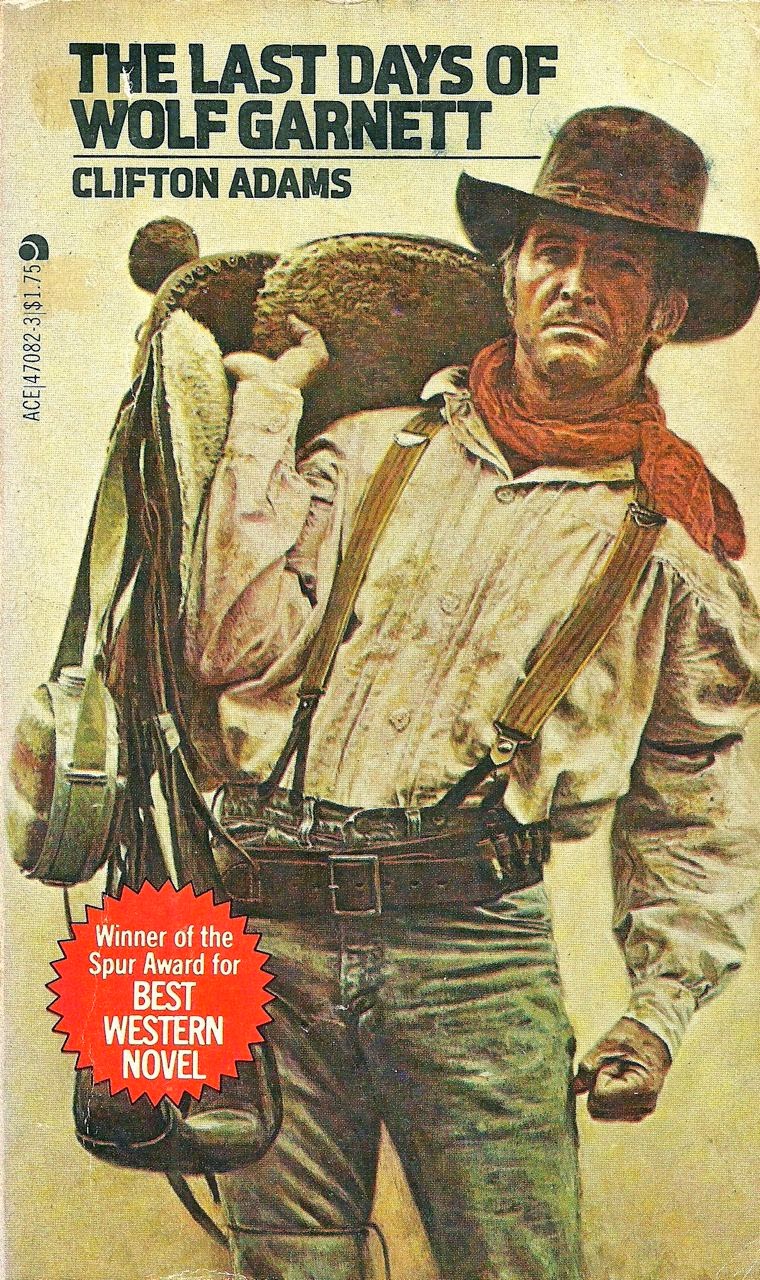 The Last Days of Wolf Garnett was originally published in 1970, one year before Clifton Adams died all too young at the age of 52. It was Adams’ second consecutive novel to win the Spur Award for Best Western Novel from the Western Writers of America (the other was 1969’s Tragg’s Choice). It’s a doomy, atmospheric western with a grim, mysterious plot. If you’re looking for a noir western, you couldn’t ask for a much darker—or much better written—tale than this. As its title indicates, the book is preoccupied with death. This concern, however, was not new to Adams’ work; the theme had haunted his books from the very start of his career and, as this Wolf illustrates, continued right up until the end.

“So this, he thought emptily, is the way it ends. After almost a year of fury and grief, his only satisfaction was a grave on a barren hillside, a horror that had once been a man.”

When Frank Gault pulled into the frontier town of New Boston, he was looking for Wolf Garnett, the outlaw who killed his wife. He found the man—but, according to Sheriff Olsen, Garnett was dead and buried. Gault wants proof, but the deeper he digs, and the more people he asks, the more Olsen tries to shut him up. Convinced the sheriff is hiding something, Gault risks life and limb for a revenge that might just be futile. What if, in fact, Wolf Garnett really is dead? 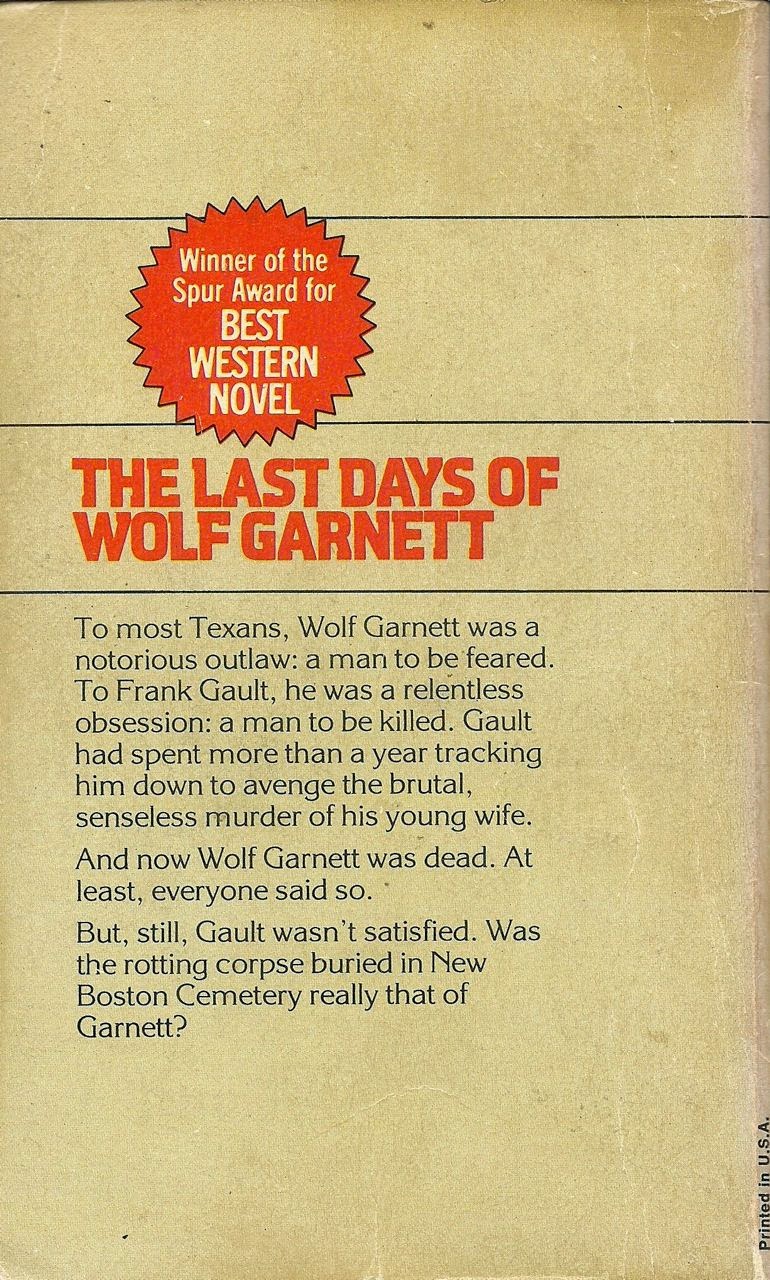 Clifton Adams is among the darkest, most noir-tinged of western writers. His style could be characterized as “eerie bleakness,” a phrase used in the book to describe Gault’s own thoughts. Adams doesn’t write stories of wide-open ranges or little houses on the prairie. For Adams, the range is a desolate purgatory—the western equivalent of the noir gutter. Here, just as in The Desperado and A Noose for the Desperado, his protagonist is homeless, a haunted drifter with nothing to return to and nowhere to go. One of the hallmarks of Adams’ work is his characters’ inner-lives. His people are frequently lost in their own labyrinthine anxieties and obsessions, driven by their self-loathing: “Gault sat beside the dying fire, smoking, trying to keep his mind away from the past.” But this is a futile endeavor—actively distracting yourself only deepens the mark of that which you are trying to forget.

One of Adams’ recurring themes is that death is never easy, never simple, and never neat. His westerns may express an existential worldview—preoccupied with the meaning of their lives, or lack thereof—but they’re also grounded in ugly, gritty detail. His characters are lost in thought, but their feet are firmly planted on the ground, and their fate six feet under. “For almost a year Gault’s thoughts had been concerned exclusively with the subject of death. In his dreams, waking and sleeping, he had killed Wolf Garnett a thousand times. But it had never been like this, with the crunch of bone and rush of blood. In his mind it had always been swift and clean and right.” As in his two Desperado books, the act of killing is a disturbing and character-changing experience. “Two men he had killed in almost as many days. It was not a comfortable knowledge to live with.”

Gault is a “Searcher,” in the tradition of Alan LeMay’s novel (now better remembered as the John Ford film). “Lord, Gault thought wearily, I feel like I’ve been traveling half a lifetime. Without sleep or rest. Sometimes he almost forgot why he was doing it.” The search both gives meaning to Gault’s life, but also drains the life from him. It’s a self-destructive path that seemingly offers no happy ending. Like so many of noir’s denizens, whether in the west or in the gutter, Gault is as cursed as Sisyphus, caught in an endless circle of punishment.

Gault admits towards the end of the book, “I’m a different man already.” It’s an ambiguous statement, because with the self-knowledge gained throughout the story, Gault—like many of Adams’ characters—don’t like what they’ve learned about life, or what their experiences have revealed about themselves. “There was a wild man locked up inside him. And rivers of bile. They would not let him rest or work or do any of the quietly productive things that ordinary men did.”

The Last Days of Wolf Garnett, if it isn’t clear enough already, is not a happy book. It’s a hard-hitting story of hard-lived lives, dripping with melancholy, regret, and rage—but rendered through Adams’ lyrical prose, it somehow becomes a thing of beauty.

It’s just a downright outstanding novel from a great writer who deserves to be better known.

Posted by Cullen Gallagher at 9:09 AM