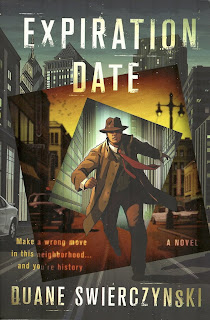 Severed limbs. Missing fingers. Bodies flying out of windows. Gruesome revenge fantasies. And all with a deft, but bizarre, sense of humor. Check, check, and check. This is undeniably the world of Duane Swierczynski. However, Expiration Date, his latest novel, is also a bit of a departure from his past few books. Instead of the hallucinatory, frenetic pacing that characterized The Wheelman, The Blonde, and particularly Severance Package, Expiration Date is more of a slow burn—an incessant drilling into the fragile mindset of Mickey Wade, ex-journalist. Without funds or a place of his own to live in, he is not only forced to move back to his old neighborhood, but he moves into his hospitalized grandfather’s temporarily vacant apartment. Oh, and his mom keeps calling Mickey to remind him to visit his grandfather while he is in the hospital.

But revisiting his old stamping ground is only the beginning of Mickey’s remembrance of things past—way past, as it turns out. Finding a bottle of expired Tylenol in the cabinet, Mickey takes two and promptly blacks out. Like Alice, he enters the proverbial rabbit hole and emerges in 1972 on the day he was born. Seemingly invisible to all but a little boy, he can walk around and see his hometown of Philadelphia as it was almost four decades earlier. It also means he can see what his family was like before he was born, and perhaps he can finally find answers to the mystery surrounding his father’s accidental death in a bar fight when he was still a boy. As he begins to investigate, Mickey discovers that there is more to his father’s death than he was told, and that maybe there is a chance for him to change history. He also discovers that his grandfather was using the pills for the same thing. Unfortunately, Mickey also finds that he and his grandfather aren’t the only ones using the pills, or the only ones interested in his family tree. 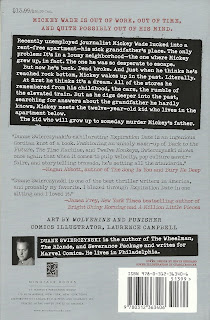 Swierczynski has never been afraid to blend genres, and one of the joys of reading his work is seeing his inventive mind unleashed upon the page. Severance Package was part-office dramedy, part-slasher flick. Expiration Date can be described any number of ways: time-travel, urban history noir; sci-fi, drugged-out family trauma; action-fantasy genealogy. Any way you look at it, the marvel of Expiration Date is less the novelty of its myriad influences than Swierczynski’s ability to seamlessly integrate all of them into a cohesive whole. Nor is the book without Swierczynski’s characteristic humor—listening to dad’s records (Sweet and Styx), or trying to steal vintage pulps to sell in the future, or spending one’s last dime on cheap beer and peanut butter (Mickey’s secret to life)—or excitement. If the spine of the book bears the name of Swierczynski, it won’t sit around unopened by the bedside for very long…nor will limbs stay attached to their characters’ bodies.

As much as the story looks into the past, one of the most interesting things about Expiration Date is the way that it, and its author, are looking into the future. Swierczynski is actively involved in comic books, and both Expiration Date and Severance Package have included not only artwork integrated into the story, but also graphically designed text and pages that make the style and atmosphere of the story more visual. He also wrote the digi-novel Level 26 with Anthony E. Zuiker, which integrated a physical book with web-based video. Expiration Date is filled with sadly dated relics—Gold Medal pulps, print journalism, vinyl records—but Duane Swierczynski is carrying their heritage and memory into the future. I am eagerly looking forward to seeing where this author goes next.

And, as always, a few quotes…

“Did a beam of sunlight really just slice through my fingers like it was a light saber?”

“This, after all, was my pill-popping lost weekend. Just me, the pills, some peanut butter, sixes of Golden Anniversary beer and a bunch of LPs that used to belong to a dead hippie musician.”

“Like a beard, an overcoat could cover any number of sins.”

“But for now, really, Mickey, I want you to shut up and let me tell this the way I want to tell it before I strangle you with my pee tube.”
at April 14, 2010