Ed McBain on Words and Writing 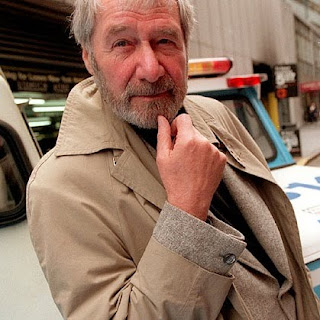 "She Was Blond. She Was in Trouble. And She Paid 3 Cents a Word" is a fond and humorous reflection on writing mystery fiction by Ed McBain (Evan Hunter) that originally appeared in the New York Times on March 29, 1999. What McBain (whose real name is Salvatore Lombino) achieved in his career is astonishing. His publishing record spanned over half a century, including hits such as The Blackboard Jungle (1954), the screenplay for Alfred Hitchcock's The Birds (1963) (based on a story by Daphne du Maurier), and a mind-blowing 54 novels in his 87th Precint Series.

In his article, he talks not only about humanizing the police genre, but he also riffs on the many tropes used by authors in mystery fiction. Among the many themes-and-variations he discusses are: Private Eye, Amateur Detective, Innocent Bystander, Man on the Run, Woman in Jeopardy, Guilty Bystander, Cop Story, and the Biter Bit.

There used to be a time when a person could make a decent living writing crime stories. Back then, a hard-working individual could earn 2 cents a word for a short story. Three cents, if he was exceptionally good. It beat polishing spittoons. Besides, it was fun.

Back then, starting a crime story was like reaching into a box of chocolates and being surprised by either the soft center or the carmel or the nuts. There were plenty of nuts in crime fiction, but you never knew what kind of story would come out of the machine until it started taking shape on the page. Like a jazz piano player, a good writer of short crime fiction didn't think he knew his job unless he could improvise in all 12 keys. Ringing variations on the theme was what made it such fun. Getting paid 2 or 3 cents a word was also fun.

You can read the whole article HERE at the New York Times website.
Posted by Cullen Gallagher at 9:15 AM