Stories for Sunday: "The Man Who Wasn't There" by D.L. Champion (G-Men Detective, Winter 1950) 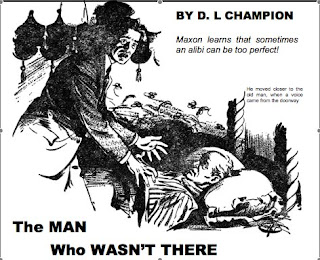 Today's selection for Stories for Sunday is by an author who is still quite new to me: D.L. Champion. I first read about him in Marc Gerald's true crime anthology Murder Plus and was intrigued by Gerald's description of him:

"D.L. Champion contributed some of the most offbeat private-eye stories ever published in Black Mask and Dime Detective. His characters included a midget investigator; a hard-nosed, legless ex-cop; a gaudily dressed Mexican PI; and 'the unchallenged world's champion penny pincher.'"

Who could resist such temptation? Certainly not me. So, in my pursuit to learn more about Champion, I discovered he also published under the name Jack D'Arcy, and was one many writers who penned The Phantom Detective under the house-name Robert Wallace. The FictionMags Index has a comprehensive bibliography of Champion and D'Arcy.

While I have come across any of the bizarre characters that Gerald referred to, I did stumble upon this clever short story by Champion called "The Man Who Wasn't There," originally published in G-Men Detective (Winter 1950). It is about a man with considerable gambling debts who decides he can't wait for a wealthy relative to die of natural causes.

"Maxon thought of murder. Naturally, he had thought of it before. He had no qualms about snuffing out the old man's life, no moral scruples at all. But he had a great many scruples about getting caught."

I am going to keep looking out for more of Champion's work. If anyone else knows anything about him, or has read any of his stories, please let me know in the comments section!