"The Paris Manuscript" by Joseph Goodrich (2022) 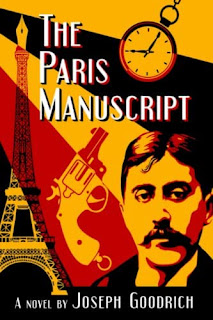 I was fully enraptured by Joseph Goodrich’s The Paris Manuscript, a historical noir set at the dawn of the fabled Années folles that is at turns dark, whimsical, nostalgic, and deeply moving. Structured like an on-rush of memories, the book begins in 1979 when elderly widower Ned Jameson goes through an old trunk while deciding whether to move in with his daughter, the contents of which send him back to 1919, in the years following World War I, where he lived with his wife, Daisy. Tormented by memories of the war, he worked as a journalist, and Daisy as an illustrator. Intrigue overtakes their lives when Daisy’s brother is blackmailed into becoming a saboteur. After the blackmailer is found murdered at a party they were attending, Ned begins to suspect Daisy is behind it—and he sets out to find the truth with an unlikely amateur detective, Marcel Proust, who volunteered at a hospital during the war.

When Proust enters the picture, The Paris Manuscript takes on a wonderful air that’s almost magical realist at times, but Goodrich keeps it grounded, making Proust a believable character within the drama at hand. When one thinks about it, isn’t In Search of Lost Time the underlying theme of so many noir works? In this sense, Proust makes a natural, though not obvious, sleuth proxy. Through Proust, Goodrich also makes a strong case for the detective-as-artist (or, is it, artist-as-detective?). “My asthma made it impossible for me to leave the car,” Proust recalls. “…I had to content myself by feeding upon what I could see. But what I can see is never enough… I must extrapolate. I am predisposed to the art of detection by illness… What I do as an artist is not so very different form what I do when I discovered [a clue which you’ll have to read the book to find out!]”

Though The Paris Manuscript is Goodrich’s debut novel, he is far from a debut writer, and is widely celebrated for his short fiction, plays, and non-fiction—and one of the pleasures and surprises of The Paris Manuscript is seeing how all of these facets of Goodrich’s artistic career find their way into the book. Correspondence, poetry, theatricality, and fiction all have significant roles, informing both the characters as well as the form of the book itself (which incorporates diaries, letters, and excerpts of literature). An accomplished dramatist, Goodrich won an Edgar for his play Panic, and several of his stage works have been collected in South of Sunset (Perfect Crime Books). His short fiction has appeared in Ellery Queen and Alfred Hitchcock Mystery Magazine; his critical writings have been collected in Unusual Suspects: Selected Nonfiction (Perfect Crime Books); and he’s the editor of Blood Relations: The Selected Letters of Ellery Queen 1947-1950 (Perfect Crime Books).

Goodrich is a mystery scholar par excellence, it’s pure joy to read as he plays with literary form and tradition, bringing both reverence and innovation to archetypes (the amateur sleuth, the party murder, and a fabulous finale that gathers all the suspects back at the crime scene), which he clearly loves and understands on the levels of scholar, author, and reader. Paying homage (without becoming a satire), The Paris Manuscript is very much a mystery for readers who love mysteries—which certainly describes me.

As much as I’ve been writing about the meta aspect of the novel, it doesn’t overpower the core story, about a man who is quite literally (to borrow Proust’s title), in search of lost time, at two very different moments in his life. In 1979, he pores over objects that bring him closer to the past, the wife that’s gone, and the life they had. In 1919, Ned is also adrift, unable to shake the shackles of war trauma from his past. “I’d beaten the odds, but I was miserably wear and bluer than a midsummer Minnesota sky. I could see no light, no hope anywhere. Life wasn’t worth the trouble it would take to end it.” Grappling with guilt, suspicion, and remorse, Ned is a noir protagonist through and through—doomed by circumstance, and doomed by choice. But unlike Goodis or Woolrich, Goodrich at least gives his characters a chance, not to undo the past, but to try and make things right, and to take back control of time.