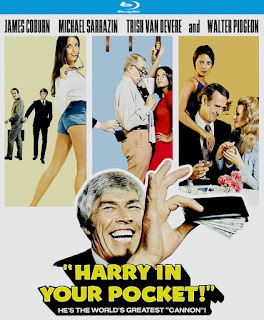 One of the most unusual and unjustly forgotten crime films of the 1970s, Harry In Your Pocket is a pickpocket procedural and the only feature film directed by Bruce Geller, one of the creators behind Mission: Impossible and Mannix.

The film begins with a meet-cute between thief Michael Sarrazin and his victim, Trish Van Devere. After she realizes he stole her watch, the two of them quickly reconcile and team up to become partners in crime, which leads them to pickpocket ringleader James Coburn who hires the young couple to be part of his team with Walter Pidgeon. What follows is essentially a how-to guide of their multi-person schemes, from the distraction to the pick to the pass.

Instead of grand scale crimes like those detailed in Rififi and Plunder Road that are inherently epic and cinematic in their scope, Harry In Your Pocket has no spectacle to exploit. A finger heist film, its central fascination is never meant to be seen in the first place. The film smartly builds suspense by focusing on the coordination of the team and the interplay of its agents.

Harry In Your Pocket is also a short-con narrative. Unlike most heist films which focus on do-or-die long cons with a big payoff, there's nothing all that glamorous or romantic about swiping wallets and watches. While they are seemingly living a life of luxury in fancy hotels and nice clothes, it is all part of their act. The sad reality of the short-con is that they're stuck in a rut, and there's no big payday at the end of their journey.

Coburn, as always, is top-notch. His effortless charm is equally at home in westerns, war pictures, spy spoofs, crime stories, comedies, and just about any other period or contemporary story one can think of. The more I watch him, the more he rivals Steve McQueen for the title of "the King of Cool." No offense to McQueen, of course, but Coburn has a coolness all his own, a combination of lanky grace, silver-haired style, and inimitable voice that combines a western drawl with fast-talking sophistication. Truly one of a kind.

The film is now available in a gorgeous blu from Kino Lorber Studio Classics.
at January 27, 2016