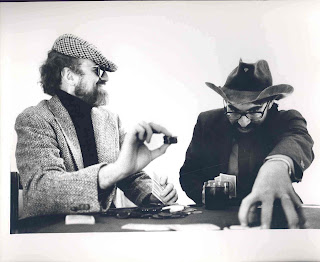 Imagine a poker game with Brian Garfield, Donald Westlake, Lawrence Block, and occasionally Robert Ludlum. That's one game I'd gladly pay to sit in on! (And I'm sure I would pay--my poker days ended in middle school, and even then I wasn't exactly Orono, Maine's sharpest card shark.)

Head on over to The Chicago Blog (courtesy of the University of Chicago Press) to read the interview with Brian Garfield. And dig those crazy beards! 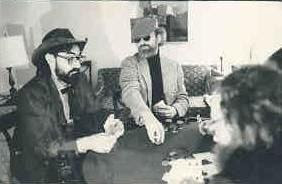 LTS: First off, why don't you just tell us a bit about your friendship with Donald Westlake. When and where did you meet? Were you friends for a long time?

BG: We met at a poker game in New York, 1965. It was a regular weekly quarter-limit writers' game. Lawrence Block and agent Henry Morrison were regulars. The game was a wonderful source of one-liners—now if only I remembered them. . . .

Our "lit'ry" discussions might have seemed odd to people who weren't writers. For example I remember Don's fascination with the way Ira Levin had cleverly concealed the identity of the killer in A Kiss Before Dying, and we all admired the way Mickey Spillane solved the mystery in Vengeance is Mine in the final word of the novel. I don't know that it's ever been done that way before. Spillane was a comic book-style writer, but we all thought he was much underrated as a storyteller. We didn't talk about his writing style; we talked about his inventiveness. It helps, I suppose, to realize that we all had worked our way up through the pulps—probably the last generation to do that, as the pulps mostly died by the early 1960s. Don and Larry wrote crime stories and softcore porn; I wrote crime stories and Westerns. (They came from the Northeast; I came from the Southwest.) We all had been published since the end of the 1950s. By the mid-60s we'd found a way to do the apprenticeship and make a sort of living out of it, although it wasn't a great living; most of my early books earned somewhere between a few hundred and a thousand dollars. All that meant was we had to write them fast. We thought of the work as fun, challenging but easy to do.