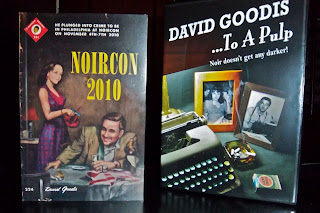 NoirCon 2010 is off to a great start! The 4-day event fittingly kicked off with Larry Withers' terrific new documentary, David Goodis...To a Pulp. When Withers' mother, Elaine, passed away, he and his family discovered a family secret that had been locked away for nearly half a century: Elaine had been married to a young pulp writer named David Goodis. Withers' doc is both a literary biography and a love story, but not the kind with a nice and neat ending. While much of their relationship is still shrouded in mystery, Withers chronicles both of their lives leading up to their brief marriage, what happened to both after the divorce, and -- most importantly -- Elaine's impact on Goodis' writing. Withers, along with Goodis scholars such as Lou Boxer, Aaron Finestone and Jay Gertzman, provides evidence that the haunting, domineering women in many of Goodis' books may be variations on his relationship with Elaine.

David Goodis...To a Pulp is a long overdue vindication for the legacy and work of David Goodis. It treats his novels with the scholarly eye and respect they deserve, and provides a humanistic portrait of a man who, still to this day, is as much an enigma as he is an icon. Fans of the author will not want to miss this one. Stories such as him pretending to get caught in the train tracks, or playing Dr. Kildare with his friends, makes Goodis all the more recognizable as a real person, but it also makes his erratic adult behavior all the more complex.

The post-film Q&A with Jared Case revealed that not only was the documentary made with passion, but also on an incredibly shoestring budget, which makes the final product all the more impressive. 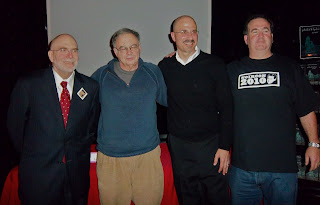 Also on day 1, I got to meet in person many friends I have made through Pulp Serenade. Patti Abbott, Jed Ayres, Cameron Ashley, Lou Boxer, Aaron Finestone, Duane Swierczynski, Kieran Shea. Sitting at a German Beer Hall (while sipping herbal tea, no less), Jonathan Woods (author of Bad Juju & Other Tales of Madness and Mayhem) wandered over to our table to hang out. The fabulous graphic designer Jeff Wong (who made the awesome program for NoirCon 2010 pictured at the top, as well as designing many of the Busted Flush Press covers), was also at our table.

All in all, a great start to NoirCon.