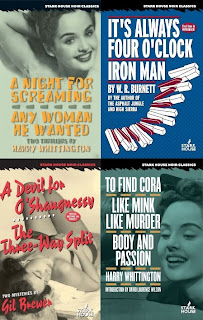 Stark House Press’ lineup is a veritable Who's Who of classic crime fiction. Harry Whittington, Gil Brewer, W.R. Burnett, Peter Rabe, Wade Miller – the list goes on, and thankfully continues to grow. Stark House is one of the most prominent advocates for pulp literature out there, keeping all your favorites in print and introducing you to a whole lot more. And their double- and triple- bills are easily some of the best deals around. Their new collection of three Harry Whittington novels – To Find Cora, Link Mink Like Murder, and Body and Passion (reviewed here) – is phenomenal, and it introduces American readers to a book previously only available in French.

Recently I had the pleasure of interviewing Greg Shepard, head editor and publisher over at Stark House, about the Whittington trio, how the company got started, and what directions it will be going in.

Pulp Serenade: To start things off, how did Stark House Press come into being?

Greg Shepard: Stark House Press began as a family affair back in 1998. We pooled our talents. My dad, Bill Shepard, is a retired editor, my mom, Joanne, a proofreader. My ex-wife is a painter and my brother Mark is a graphic design artist. And I had been a buyer, seller and distributor of books, and had the contacts. The initial concept was to specialize in genre fiction. Everyone but my brother dropped out, which left me to pursue what I wanted, which was mystery reprints, mostly hardboiled.

PS: What do you look for in prospective titles?

GS: I look for a good story, preferably one that I’ve read more than once that grabbed me as much the second time as the first. I also like to offer more obscure titles, as I did with Elisabeth Sanxay Holding and the new Harry Whittington. I have my favorites like Peter Rabe and Gil Brewer as well, and these are authors I keep coming back to for reprints.

PS: The recent collection of Harry Whittington titles – To Find Cora, Like Mink Like Murder, and Body and Passion – is like a treasure that most readers didn’t even know existed (particularly Like Mink Like Murder). From the introduction by David Laurence Wilson, it seems he and Lynn Munroe were researching these for quite some time. When did Stark House come on board in the project?

GS: David and I had talked about a follow-up to A Night for Screaming/Any Woman He Wanted even before that one was printed, so that would have been around three years ago. He had access to some of the rarer books like Cora is a Nympho, and somewhere along the line he tempted me with an English language version of a book he was then calling Mink, which had only been published in France. I was interested immediately.

PS: Were other Whittington titles considered? How did you all decide on these three particular titles out of the thirty-six recently rediscovered, or all the rest of his out-of-print work?

GS: If memory serves, I mentioned to David that I wanted to do Rapture Alley, the story of a woman’s descent into drug addiction. But he thought Cora and Body and Passion worked better with Mink, and suggested we pair Rapture up with another of Harry’s social mysteries down the line. Harry had written so many books, so many great stories, and David was right in the midst of researching them, I was more than willing to take his suggestion. And of the rediscovered books, we picked Passion Hangover — reverting to Harry’s original title, Like Mink Like Murder – for the simple reason of its complicated history and intriguing backstory. That and the fact that it was another great story.

PS: Since you specialize in pulp literature, where do you think its importance lies? Why are they continuing to survive and impact readers, when they were initially thought to be ephemeral, disposable books?

GS: For me the importance begins in the stripped-down simplicity of the story. Within that framework, there are so many marvelously unique voices – Thompson, Goodis, McCoy, Burnett, Williams, Rabe, Brewer, Packer, Williford, Chase, MacDonald, Woolrich, etc. — each with their own story to tell. And in revisiting these “disposable” books, we get to relive and experience the mores of another era, which by its very distance seems like a simpler, less complicated time — and that, too, has its appeal. But first and foremost, these are all great writers who continue to impact because of the quality of their work.

PS: What was your initial foray into pulp fiction? Any particular titles or authors stand out that got you into the style?

GS: The first books that made a big impact on me were the young adult mysteries of Phyllis A. Whitney. Then for years I read mostly science fiction. Somewhere along the line I discovered Conan Doyle and Sax Rohmer. But probably the first real pulp I read were the Honey West books by G. G. Fickling. The show was on TV when I was a teenager, and I gobbled up the books in all their delightful risquéness. Same with the Man from U.N.C.L.E. books (so I guess my first Whittington book was U.N.C.L.E. #2 back in the mid-60’s).

But in the mid-80’s I discovered the Black Box Thrillers edited by Maxim Jakubowski from England. And that, ironically enough, is where I got hooked on Jim Thompson, David Goodis, W. R. Burnett and Horace McCoy. After that I started collecting old paperbacks - back when you could still find them for a buck or less at used book stores - and reading them like crazy. That really was the start of my mania.

PS: I see on your website that Stark House has several non-crime fiction titles available – Algernon Blackwood, Storm Constantine, and a collection of essays on Invasion of the Body Snatchers edited by Kevin McCarthy & Ed Gorman. Is Stark House planning to branch out into other genres or non-fiction?

GS: The idea behind Stark House Press was that it would be rooted in genre fiction but not restricted to any one category. So we always felt open to offer science fiction, fantasy, horror, even westerns. We started with Storm Constantine, who writes fantasy and sf, because I simply loved her books. I contacted her and she was happy to work with us. I reprinted the Blackwood books for the same reason. I love his mystical fiction. But except in a general sense, there are no plans to branch out from the mysteries we’re doing now. But no plans not to either. I like to stay flexible.

PS: Have you ever considered publishing paperback originals yourself?

GS: I don’t really think of myself as an editor, and have resisted the notion of publishing originals until recently. I enjoy my niche. But a few months ago, Ed Gorman suggested I read Charlie Stella’s new book, Johnny Porno, and I couldn’t say no. It was too good to pass up. It’s a great story and Charlie is a helluva writer. So I will be publishing one original next year in April. Whether I publish more, I just don’t know. I don’t want to encourage anyone to send in manuscripts at this point, though, because the main emphasis of Stark House will continue to be classic reprints.

PS: How do you feel about digital publishing. Is this a direction Stark House might venture into in the future?

GS: I prefer hard copy books myself. I’m not personally interested in digital publishing. I could see making our books available on Kindle as a way to support the authors, but I’m not pursuing it at the moment. I’m a fairly retro guy, and I just can’t get away from the notion of a book as a physical object. I like the look of a book, the smell of a book. You mentioned ephemeral earlier. To me, digital publishing is just that.

PS: Lastly, any upcoming titles that you can hint at?

GS: Well, we’ve just updated the website where we’re promoting a few future titles. We’ve got two classic turn-of-the-century mysteries from E. Phillips Oppenheim, including his rarest book, The Amazing Judgment, of which there are only about three or four known copies in the world. We’ve got two more South Sea adventure mysteries by A. S. Fleischman, Danger in Paradise and Malay Woman. I love his stuff. I always seem to see Robert Mitchum as the main character as I’m reading them.

We’ll be publishing another standalone title next year called One for Hell by Jada M. Davis. This has got to be the penultimate bad cop story, and if I could find another good Davis story to pair with it, I would. This is a one-hit wonder, but it’s a killer.

I also just signed a contract to publish two of Peter Rabe’s unpublished manuscripts, The Silent Wall and The Return of Marvin Palaver. That’s pretty exciting. The one is a mafia tale set in Sicily, and the other a rollicking revenge story.

We’ll also be working with Ann Marlowe to publish Stephen Marlowe’s autobiography, Confessions of a Wandering Writer, hopefully late 2010. I’d publish more books a year if I could afford to, but I’m happy with the ones we’ve got coming up in the next year.
Posted by Cullen Gallagher at 11:31 PM