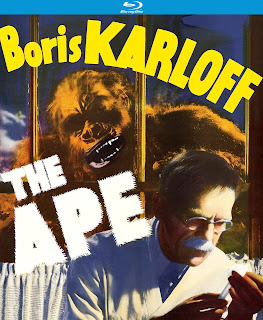 A decade before Dick Carroll was an editor for Fawcett's Gold Medal line of paperback originals, he co-wrote The Ape (1940) with Curt Siodmak (here credited as Kurt), a classic of Poverty Row horror starring Boris Karloff. Based on a 1924 play by Adam Hull Shirk, the plot concerns concerns a mad doctor, a killer ape, a traveling circus, a paralyzed young woman, and an armed posse. Allegedly written over the course in a weekend (at least that is what Carroll told Peter Rabe), director William Nigh brings in the picture in 62 delightfully breezy, light-heartedly macabre minutes, and now available in a restored Blu-ray from Kino Lorber Studio Classics.

Dr. Bernard Adrian (Boris Karloff), disgraced and outcast because of his experiments with spinal fluid, now practices secretly in a small town. His current patient is a young paraplegic woman, Frances Clifford (Maris Wrixon). When an ape breaks loose from a traveling circus, it severely injures its trainer who is sent to Dr. Adrian. Unable—or, perhaps, unwilling—to save the trainer, Dr. Adrian seizes the opportunity to extract his spinal fluid for use on Frances. Still hunting for its trainer, the ape breaks into the doctor's lab. Adrian defends himself and stabs the ape—but instead of telling the sheriff to call off the hunt for the killer beast, Adrian keeps it a secret in order to pursue his own deadly experiments.

The Ape is a movie that doesn't let logic, plausibility, or science stand in its way—nor should it. This is pure pulp cinema, where imagination, atmosphere, economy, and pacing are guiding lights. It's a movie that never takes itself too seriously, but also that never undersells what it has to offer. The ensemble cast is fabulous—the posse is a particular favorite of mine, a stellar crew of boisterous character faces, the sort that liven up movies of this period. And while Karloff's character might not be the most deeply written character he was ever given, you'd never know that from the dedication of his performance. He gives himself to the role 100% and manages to give quite a convincing and human portrayal. 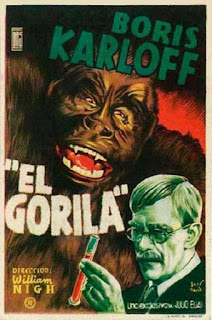 Nigh, who started in silent pictures back in the 1910s, mainly directed B pictures but did a few for the majors such as Mr. Wu (1927) with Lon Chaney and in Road to Singapore (1928) with Ramon Navarro, both for MGM. Siodmak, brother of Robert (known for his noir pictures), made a name for himself as a writer of horror and thrillers in the 1940s, including The Wolf Man (1941), Son of Dracula (1943), I Walked with a Zombie (1943), and The Beast with Five Fingers (1946), as well as the novel Donovan's Brain (1942), which was adapted three times, as The Lady and the Monster (1944), Donovan's Brain (1953), and The Brain (1962). Nor was The Ape Siodmak's last foray into simian cinema: he also directed Bride of the Gorilla (1951), which is solid campy fun. And Carroll has been described by Peter Rabe as "an old-time buccaneer type, an adventurous sort of person who’d like to recall stories of the war, in which he participated, and about fighting and drinking bouts in Hollywood when he wrote there." More famous for his career as a book editor, Carroll spent about a decade in Hollywood, providing stories to movies including Five Came Back (1939), about survivors of a plane crash who find themselves in a jungle surrounded by cannibals. The fast paced plotting that characterized Gold Medal under his editorship is already apparent here in The Ape.

The new Blu-ray from Kino Lorber is probably the best looking presentation the film has seen since it premiered 80 years ago. The Ape has been around on various public domain cheapo tapes and DVDs for years, but this new disc is gorgeous, and is taken from a 2K scan from a pristine print from the Library of Congress's collection. It's worth the upgrade just for the scenes of legendary stunt performer Ray "Crash" Corrigan in an ape suit.

For light spooky laughs, The Ape is perfect for the Halloween season.