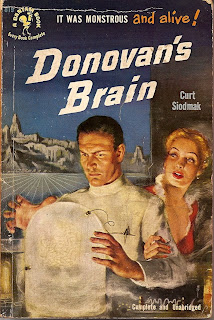 Curt Siodmak’s career is truly something extraordinary. Born in Dresden, Germany in 1902, he earned a Ph.D. in Mathematics before he decided to change paths and become a writer and filmmaker. An early collaboration with his brother, Robert Siodmak, was the now-legendary People on Sunday (1930), a documentary-esque fictional story about a group of working-class citizens who go for a picnic on their day off. One of the first naturalistic films of its kind, it was co-directed by both Siodmak brothers as well as Edgar G. Ulmer and Fred Zinnemann, and was co-scripted by the Siodmaks with the help of Billy Wilder. At the time, these were unknown but ambitious young artists making an unknown, low-budget movie. Within a few years, they would all meet again – but this time in Hollywood, where they all fled to because of Nazi persecution, and it is here in America that they would leave their indelible mark on the arts.

After leaving Berlin, Curt Siodmak made his way to England where he made several films, but it was in Hollywood where he truly hit is stride, writing some of the best horror and sci-fi scripts of his time, most notably The Wolf Man (1941) and I Walked With a Zombie (1943). It was around this same time that he also wrote the novel for which he would be most famous for – Donovan’s Brain (first printed in Hardcover by Knopf in 1943; Mercury Mystery digest in 1945; first Bantam paperback in 1950). Three times the novel has appeared on the big-screen (1944’s The Lady and the Brain, 1953’s Donovan’s Brain, 1962’s The Brain) and once on television (an episode of Studio One in 1965 entitled, “Donovan’s Brain”), in addition to several radio broadcasts (twice by Suspense in 1944 and 1948, and a parody by Orson Welles also in 1944).

Fusing elements of Frankenstein and Dr. Jekyll and Mr. Hyde, Siodmak’s Donovan’s Brain takes the standard archetypes of “the mad scientist” and “the monster” and combines them. Dr. Patrick Cory has been experimenting, without success, to keep a brain alive outside of its body. He is convinced that the brain has untapped power to continue being conscious – and to communicate – even after death. When he gets an emergency call to assist with plane crash victims, he brings the sole survivor back to his laboratory for last-minute operations. But when he realizes that death is inevitable, Cory decides that he has the perfect candidate for his own experiment: the brain of Warren Horace Donovan, a world-famous millionaire and genius. 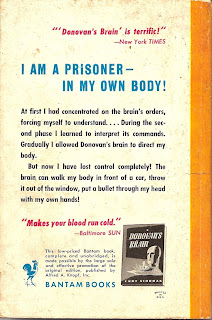 With the brain stabilized, Cory begins a series of seemingly futile attempts to communicate with the brain. And then one night he begins to get subconscious commands that he cannot control: to write with his left hand – even though he is right-handed – names he knows nothing about. It is then that Cory knows his experiment is a success, and that Donovan’s brain is alive and in communication with him. But soon Cory begins to question whether he is really in control of the experiment, or whether he himself is the lab rat. And so begins Cory’s travels to unravel not only the mystery of Donovan’s brain, but also the mystery of Donovan’s past life and his unfinished business.

The novel is written as though it is Dr. Cory’s diary, filled with his muses on the day’s progress (or lack thereof). It helps to keep the story moving quickly, as we aren’t bogged down by excessive background detail or character descriptions. There’s plenty of mystery, as we have to keep reading in order to collect enough contextual information to fully comprehend the story.

While the science behind the story acts as an implausible but interesting “what if...” scenario, Donovan’s Brain seems much more an exploration of one man’s monomania. Much like Ahab in Moby Dick, we watch as the character is transformed through passion and determination into the very thing he is trying to hunt down. The quest for “the monster” ends ironically with him finding “the monster” within himself. The power that Cory sought through his experiments he is able to enact in reality though the commands of Donovan. Money, authority, prestige, and physical force – things that he never had in his own life are now suddenly at his fingertips. But are they really “his” or are they Donovan’s?

Much of the story has to do with this gradual change of identity, until Cory and Donovan are inseparable, sharing not only the same thoughts, but also the same ailments and experiences. Cautionary tales abound within horror and sci-fi stories, but more than the morality of Cory’s experiments Siodmak seems concerned with the limitations of the scientist himself rather than science. In trying to manifest a more perfect human consciousness, Cory only magnifies the human weakness for corruption, violence, and greed. It is us, and not science, that is the problem. As Siodmak writes, “Man can engender what he is himself. Nothing more.”

And now for a few more of my favorite quotes from Donovan’s Brain:

“The human body can adjust itself to most unnatural conditions.”

“I’m not interested in civilization. We are so ignorant of our souls that we take refuge in mechanics, physics, chemistry. We are losing our consciousness of the human dignity that distinguished man from animal. You are making the human being a highly specialized stone-age man ruled by egotism. You are creating a mechanical, synthetic life and killing the spirit that has lifted humanity above the beast.”

“He may have been an honest man all his life only because he was convinced if things were ever too bad, he could be dishonest and change his luck. Now that this had not worked out either, he despaired.”