"The Bughouse Affair" by Marcia Muller and Bill Pronzini (2013) 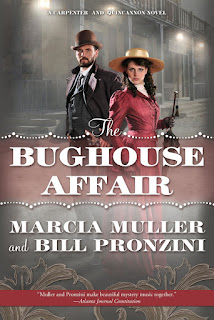 The Bughouse Affair is a collaboration between two modern legends of the PI genre (who also happen to be husband and wife): Marcia Muller and Bill Pronzini. Equally influential are Pronzini's Nameless Detective and Muller’s series sleuth, Sharon McCone. First seen in 1977’s now-classic Edwin of the Iron Shoes, McCone showed that modern-day mean streets are not just for boys, and cemented the female PI as a character to be taken seriously by writers and readers alike. Pronzini's Namless first appeared in Alfred Hitchcock’s Mystery Magazine in 1968’s “It’s a Lousy World” and has appeared in several dozen novels over the past half-century.

A delightfully screwball historical set in late-19th century San Francisco, The Bughouse Affair centers around the PI firm of ex–Secret Service agent John Quincannon and ex-Pinkerton Sabina Carpenter: partners in profession, not love, much to Quincannon’s dismay. With Quincannon repeatedly lousing up his attempts to catch a serial burglar, and Carpenter losing track of the female pickpocket she is trailing, business is not going so well. The cases seem increasingly to be interrelated, and a fellow claiming to be “Sherlock Holmes” enters their lives, and makes things worse. This pain in their necks claims to have both cases wrapped up but doesn’t, and it’s up to Quincannon and Carpenter to step up their games, save face, and solve the case.

The Bughouse Affair may be a more cordial cozy than Pronzini's recently released noir novellas, Kinsmen and Femme, but it’s an equally fine piece of mystery craftsmanship. Like a tightly edited, multinarrative movie, The Bughouse Affair never drags, jumping between Quincannon and Carpenter’s adventures, creating a comical dialectic between their diametrically opposed personalities. Stubborn with unrequited love, Quincannon is the classic hardboiled dick who acts out of instinct rather than intellect. Carpenter is more sophisticated and cerebral in her practices but equally stubborn when it comes to her feelings, hence her refusal to give Quincannon the time of day. Originally appearing in Pronzini’s 1985 novel, Quincannon, it’s great to see the two detectives back on the page again. They’re an instantly likable duo, charming and amiable enough to win over even a noir-hardened, cozy-phobic reader like myself. I hope it won’t be too long before Pronzini and Muller pair them up on another case.

(This review was originally published February 10, 2013 in the Los Angeles Review of Books. It appears here in a slightly revised form.)
at July 12, 2020