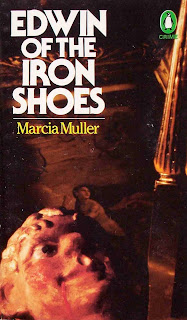 “I don’t like being badgered by little girls playing detective.” He stood up.

Harmon was hiding something from me, and not very skillfully either. I took what seemed like a big risk and remained sitting. “I’m not playing, Mr. Harmon. This is for real.”

Marcia Muller first introduced her series PI Sharon McCone to the world in 1977. The book was Edwin of the Iron Shoes. Since then McCone has gone on to appear in 28 novels and numerous short stories, and her creator has won numerous awards, including the Eye Award for Lifetime Achievement from the Private Eye Writers of America. Muller’s latest Sharon McCone mystery, City of Whispers, is set to be published October 26 by Grand Central Publishing. In preparation for that, I decided to go back to the very first McCone case and catch up.

In Edwin of the Iron Shoes, Sharon McCone is a late-twentysomething investigator for All Souls Cooperative legal services. She had been assigned to look into a series of arson and vandalism attacks on a group of antique and junk stores on Salem Street in San Francisco, but was unable to find who was at the bottom of it. But now that one of the shop owners, Joan Albritton, has been murdered, McCone is back on the case.

As she narrows her suspects, McCone’s investigation leads her in several directions. First, there are the developers, like Cara Ingall, who had failed to buy out the Shelter Street shops and build condos—would they be desperate enough to force out the current tenants, even if it meant murder? Then there are Joan’s neighbors, such as Charlie Cornish, a junk dealer and Joan’s sometime lover—but is business bad enough to turn them from compatriots into competition? Oliver van Osten, Joan’s antique dealer, seems suspiciously willing to lend a helping hand, nor does McCone trust Ben Harmon, the bail bondsman who helped Joan’s deceased grandson when he was in trouble. If that wasn’t enough, McCone has to contend with Police Lieutenant Gregory Marcus, who at times seems to be her adversary and at others her would-be paramour.

My first step into the world of Sharon McCone was very positive, and I’ve already ordered more of the series to read next. I was really drawn into the setting of late 1970s San Francisco, and its specific culture and politics that become so central to the plot. At the heart of the mystery are issues of urban renewal and gentrification, topics that are still highly relevant today. Barry Jenkins’ 2008 indie romance Medicine for Melancholy (no relation to the Bradbury story) even touches on similar issues surround modern-day San Francisco. Muller also did an excellent job exploring the intricacies and duplicities of the antique trade, and using those elements to create a unique and atmospheric plot.

The biggest strength of Edwin of the Iron Shoes, though, is its protagonist: Sharon McCone. She’s tough, smart, and very likable, but most important she is also realistic and relatable. When McCone gets into scrapes, she’s certainly capable of taking care of herself, but she’s no superhero. She allows us to witness her trepidation as she waits in her car while a drunk stumbles past late one night. Could she take him in a fight? Maybe. Could he be faking and carrying a knife instead? Perhaps. You never know what will happen in a big city in a dark alley, and McCone isn’t stupid. She’s realistic. She knows the dangers, and she’s prepared—not just physically, but intellectually. McCone also seems like an actual late-twentysomething who is just starting her career: her apartment isn’t nice, and she lives off of cookies, bagels, and chocolate bars. Little touches such as these give McCone that necessary third-dimension to make her stand out from the archetypical private eye.

Edwin of the Iron Shoes was Marcia Muller’s first published novel, but from the confidence and clarity of her prose, the maturity of her characters, and the smoothness of her plot, you’d never guess it. It’s an assured and impressive debut, and I am greatly looking forward to catching up with the rest of Marcia Muller’s bibliography soon.
at October 13, 2011