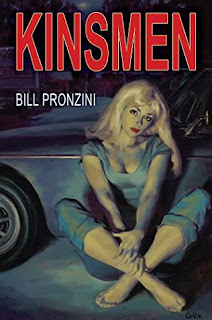 2013 marked the 45th anniversary of one of crime fiction’s most enduring and hardest working PIs: Bill Pronzini’s Nameless Detective. Making his first appearance in Alfred Hitchcock’s Mystery Magazine in 1968’s “It’s a Lousy World,” Nameless has appeared in 36 novels and more than 40 short stories. At the moment, his is the longest running PI series currently in print. By this point, he’s out performed and outlived the Continental Op, Spade, Marlowe, Archer, Coffin Ed and Gravedigger Jones, and most of his snoopy brethren. Nameless now stands with Holmes, Poirot, Nero Wolfe, and Spenser as one of the longest surviving literary private eyes of all time, and Pronzini deservedly towers tall alongside their titanic scribes. Pronzini was instrumental in modernizing the private eye genre, moving away from overly stylized syntax and hardboiled super heroes towards a more realistic and humanistic presentation in which we can recognize our own world and ourselves. Whether they know it or not (and hopefully they do), all contemporary PI writers and readers owe a great debt to Pronzini. Scholar, collector, editor, anthologist, and writer, he is, without a doubt, among the most significant minds in the mystery field of the past century.

Over the years, Pronzini has kept the name of his first-person narrator closely guarded, revealing it only once in the entire run of the series thus far (or so rumor has it, I’m still playing catch-up and haven’t come across it yet). Despite his anonymity, however, Nameless is among the most recognizably human of private eyes. He is an archetype fueled by heart rather than hype. He carries a gun not out of bloodlust (like Mike Hammer), but for protection from a world he knows is twisted, violent, and remorseless. He’s not hard drinking, fast loving, or quick with the quip. A San Francisco resident, devoted collector of pulp magazines and crime fiction scholar (like Pronzini, himself), Nameless is aware of his profession’s literary tradition, and he shows affection for his predecessors without ever seeming affected or self-conscious. He’s less extraordinary than he is ordinary; more like a neighbor we’re likely to sit at a counter with at the diner than someone who would save the world from certain doom. Nameless is a professional, he does his job, and he cares about it, but he’s mortal, and—more importantly—he mourns. “It’s a hell of a world we live in,” he says in Kinsmen, “A hell of a world.” 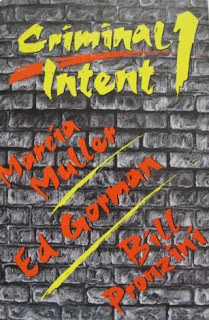 Cemetery Dance published two new additions to Pronzini’s ever-lengthening bibliography, the novellas Kinsmen and Femme. Kinsmen, originally published in Criminal Intent 1 in 1993, finds Nameless investigating the disappearance of two college students last seen at a backwoods motel in upstate California. When he learns the couple was interracial, Nameless begins to wonder if there’s more behind the townsfolk’s tight lips than just innocent resentment of his prying eyes. Pronzini doesn’t indulge in the usual PI dramatics; like Ed Gorman, the great humanist amongst all PI writers, Pronzini is too sensitive to the pain of the victims, too sick over the hate of the criminals, and too hungover from bearing witness for too damn long. Says Nameless as he exits a movie theater in disgust at the film, “Entertainment? Hell no. There’s nothing entertaining about blood and pain and abused flesh. Not at the best of times and sure as hell not when your job is dealing with the real thing in the real world.” Pronzini has exchanged romance for reticence, excitement for empathy. “It made me feel cold, dirty, and sad and angry,” Nameless says of the case, and it’s a feeling that pervades the whole work. There’s nothing sanctimonious about this, as one might expect from Chandler or Spillane. Instead, Pronzini offers weariness and melancholy. 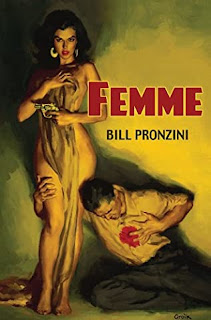 Femme, a new work from Pronzini, is an outstanding addition to his already impressive body of work, and proof that after nearly 80 adventures, the Nameless series is still going strong, still crisp, and never boring. Evoking the famous meeting of Private Detective Sam Spade and duplicitous dame Brigid O’Shaughnessy, who claims to be looking for her sibling, Nameless’s new case begins when Cory Beckett engages him to find her missing brother, Ken, wanted for stealing a diamond necklace from his employer’s wife. The case may be classical PI territory, but Pronzini’s approach is fresh. The initial investigation has amusing trappings—annoying yachtsmen, packing-peanut entrepreneurs, union leaders, and extramarital affairs—but, in characteristic Pronzini fashion, the emotional ruin at the heart of the case is devastating, and downright sorrowful. “Sickness and disgust, mingled with sadness and an impotent anger at the inhumanity of it,” is what Nameless feels. Private eye fiction isn’t all fun and games anymore.

As Kinsmen and Femme exemplify, the mechanics of Pronzini’s plotting are flawless and fluid. No hiccups, no stretches in logic, nothing beyond believability. He is reticent with his use of similes, but when he does use one it is uncontrived and spot-on. Ken Beckett is described not just as a moth “unable to resist the pull of a destructive flame,” but as one “fluttering back and forth, going nowhere.” The elegance of Pronzini’s language prevents it from seeming a cliché. His phrasing, so direct, is at times like poetry. “Alive, she’d been beautiful; dead, she was a torn and ugly travesty.” His use of the semicolon is a surprising and delicate touch, maintaining the subtle, lyrical lilt of the sentence.

Both novellas have the smooth efficiency and concision of a short story, but expanded to 180-ish easy-reading but hard-hitting pages. Unpretentious, Pronzini doesn’t resort to extreme violence, kooky concepts, or narrative or stylistic gimmicks. He doesn’t have to. There’s an ease to his prose, like João Gilberto’s guitar work. The skill is in making something so complicated sound so effortless, relaxation the true sign of mastery. He doesn’t pander or perform; where others stretch the private eye form to make room for themselves, Pronzini tightens it in calm confidence.

The real pleasure, though, is in the voice. His detective isn’t out to change the world, just out to do a job and do it well. Along the way, he’ll do the right thing if he can. Nameless isn’t an idealist. He’s a realist—and Pronzini is the same, not out to change the game, just to do his job, tell a good story, and entertain a few readers.

(This review originally appeared on February 10, 2013 at the Los Angeles Review of Books)

Posted by Cullen Gallagher at 6:28 AM