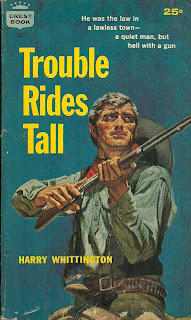 Harry Whittington never wrote a better epithet for his own work than this, a telling snatch of dialogue from Trouble Rides Tall:

“Men in hell have no choice.”

Whittington’s characters, male or female, are always in hell, and their actions are motivated by their perceived lack of options. Sometimes their hopelessness is self-imposed, like in To Find Cora, when a jealous husband chases his wife and finds himself hostage to his own doppelganger. In the case of Bernice Harper, the title of her book says it all: Fires that Destroy. She gets the money, gets away, and gets the man she wants—but in the end, her desires ensure her own self-destruction.

In Trouble Rides Tall, Marshall Bry Shafter’s hell begins when a local prostitute is found brutally murdered on the outskirts of town. All of Pony Wells shows up to exhibit their contempt for the woman. Only Shafter is sympathetic, because he finally realizes that, in the eyes of the townsfolk, he is no different from the deceased woman. The town hired them both for a job, and they had no human value beyond it. Shafter served his purpose—“cleaned up” the wild folk, and made Pony Welles safe and sanitary on the surface—and now he’s no longer needed. But what Shafter now realizes is that he only institutionalized crime, corruption, gambling, prostitution, exploitation—he made it possible for the local politicians to profit from these practices without calling too much attention to themselves.

And they have Shafter to thank. 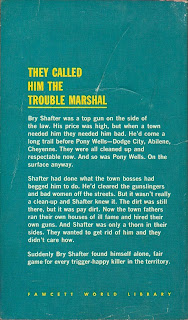 Trouble Rides Tall is a different sort of story for Whittington. For one, its main character, the “Trouble Marshall” Bry Shafter, is older than most of the author’s protagonists. Shafter is nearing 40 which, for a Marshall who cleaned up Dodge City, Abilene and Cheyenne, is a ripe old age. Also, instead of the usual “man on the run” or “vengeance” scenario, Shafter’s self-loathing and unpleasant self-knowledge fuel the plot. The book is as driving and intense as Whittington’s best, but it is also more reflective and elegiac.

Much of the drama of Trouble Rides Tall unfolds internally, as Shafter comes to terms with the fact that he’s not the hero he once thought he was. Supposedly he is looking for the killer, but most of the scenes involve Shafter confronting the townsfolk and realizing how quickly he lost control of his life: his job cost him his relationship with the woman he loves, the community he policed for years is now trying to get rid of him, and now there’s a young gunfighter in town itching to make his mark by taking down the notorious “Trouble Marshall.”

Whittington excelled at writing frantically paced, dynamic novels that pillaged a protagonist’s soul. He knew how to keep the surface-level entertaining, but also provide enough depth to make it resonate. His characters weren’t as psychotic as Jim Thompson, he wasn’t as lyrical as David Goodis, and he didn’t have the psychological precision of Peter Rabe, but Whittington had his own thing going for him. He knew how to distill a story to its essence, and have it unfold on the page almost in real-time. Few (if any) ellipses in time, just a plot that ticks by like runaway dominos. Whittington didn’t write ensemble stories, but usually invested the novel’s energy into a single protagonist. When the formula worked, Whittington ended up with a great novel like Trouble Rides Tall. It’s not one of his best-known works, but it’s an exceptional example of Whittington in his prime. It’s currently out of print, but those who can track down a copy won’t be disappointed.

A few of my favorite quotes from the book:

“A trouble marshal was a breed apart, a lonely man.”

“The world was no longer good or secure or warm. He was frightened and lonely and sick with horror. The world had turned as black as dirty water.”

“Its very openness gave it a kind of isolation. A sand-washed boulder stood like a huge grave marker atop the knoll, greasewood and mesquite tangled into a thicket. The rocks and thin crusted sand rendered the place worthless and shunned, a barren spot nobody wanted.”

“No. When you’re my age, Maudie, and know nothing, you realize what a bad spot you’re in. You know one job. The job you’re in. You might be too old for it, but it’s all you know.”

“We can’t tell our nerves when to go bad, or our conscience when it is convenient to paralyze our will. I don’t know how it happens, Shafter, just that it does. I suppose it’s a kind of compensation. A man cannot go on doing what he innately feels is wrong forever without paying for it. Perhaps in my own brilliant way I have just explained sin and atonement to you.”
at March 02, 2011