"The Mysterious Elaine" by Larry Withers 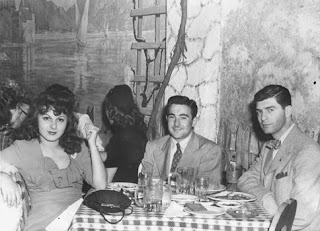 Over at Shooting Pool with David Goodis, Aaron Finestone has posted a new essay by Larry Withers called "The Mysterious Elaine." It originally appeared in the 2010 NoirCon program. It's about Goodis' enigmatic first wife, Elaine Astor, and the influence she had on his work.

"She could be Cassidy's Girl. I've heard tell she's the Blonde on the Street Corner. Behold, Clara Ervin is another possible incarnation. She's the mysterious Elaine, Mrs. David Goodis, my mother. There's speculation whether she was an inspiration for Goodis' more domineering female characters, or did he seek her out to fulfill his vision of womanhood? I recognize this woman, but what the truth is, we'll never know. Still, even at her worst, David treats this archetype with a certain reverence and humanity, as with all his characters."

Goodis fans won't want to miss this, and it will give new meaning to some of Goodis' best work. Check out the whole essay here.

Withers also directed the documentary David Goodis...To a Pulp. I got the chance to see it on opening night at NoirCon 2010 (see my coverage for more details). It's a fond and informative tribute to Goodis, filled with insightful and candid remembrances from those who knew him. Withers' fascinating trail of research is impressive, and it's brought to light many important details about Goodis' life and career. Buy it here from On Air Video.