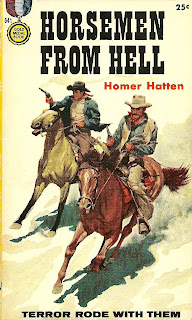 Horsemen From Hell has two volume settings: eleven and three. Homer Hatten’s style shifts between being fierce and intense at full blast to tedious and monotonous. It makes for an uneven book, but with occasionally inspired moments.

The book opens with Melissa McCutcheon stepping off the riverboat at a small, portside town on the Mississippi where she hopes to secure passage up north to Springfield. Her husband is a fugitive on the run, and she wants to track him down. The first few chapters are written with vivid details of decay and violence: a muddy wasteland with dilapidated houses whose roofs and walls are collapsing inward. Within seconds of entering the local saloon/hotel, Melissa is under attack from its crazed, libido-frenzied owner. Clothes are torn and tables are crashed. She throws boiling grease on his face, and sets his clothes on fire.

It’s one hell of an opening—savage, exciting, and atmospheric. Like Dudley Dean, Homer Hatten delights in putting his characters through intense physical punishment. As one character thinks in the midst of a fight, “There was nothing real except the brutally swinging boot.” 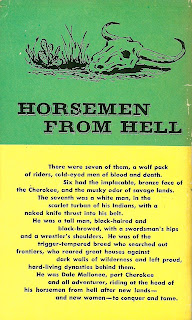 The next chapter is equally violent. Melissa hides in the attic while Burr Keltin and his Swampers duke it out in the saloon with Dale Mallonee and his band of Cherokees. Dale comes to Melissa’s rescue, and agrees to oversee her trip to Springfield, where he is looking for his former business partner who ran off with all his money. Needless to say, Dale’s partner will do anything to prevent Dale from reaching Springfield…

After a great opening, the plot tones down considerably. Melissa and Dale’s searches are, of course, linked, and Homer Hatten takes way too long setting up the context necessary for the final showdown atop an icy cliff during a storm. It’s well worth it to get to the end, when the action and atmosphere get kicked back up to 11, but it’s a long slog through exposition to get there. Even Hatten seems to get lost—Dale is absent for most of the story, and his “horsemen from hell” barely play any role in the story.

Most of the characters are one-dimensional, but at least Hatten shows us a different and refreshing dimension. The female characters defy the clichéd dichotomy of virgin/whore. Melissa is not so different from Charlotte Sherwood, the presumed “wife” of Dale’s adversary: they’re both intelligent, strong-willed women who fled the oppressive, restrictive morality of their homes. Proto femme fatales, they realize the men around them are easily manipulated by sex, and they’re not afraid to use it to further themselves. What makes them feel modern is that Hatten doesn’t villainize them for their sexuality or the way they use it.

Horsemen From Hell was published in 1955, one year after its author, Homer Hatten, committed suicide. His obituary stated that he had two novels left unfinished. I’m uncertain if Horsemen From Hell was one of them, but the novel’s inconsistent tone and sloppy structure makes me wonder if perhaps Hatten had intended to do more work on this novel, or if another unaccredited writer hastily completed the book from Hatten’s notes. I haven’t read other books by Hatten, so I can’t comment on whether it is stylistically consistent with his other Gold Medal Westerns. I just received Conquest and Westport Landing, so I will report back soon with more details. As it stands, Horsemen From Hell is a Gold Medal curiosity from an author deserving of more attention.

Some quotes I liked from the book:

“Her world had shrunk into a tight little circle that contained nothing except her aching body and a filthy gag that choked her when she tried to breathe and a tight-pulled rope that had long since rubbed the flesh away from her ankles so that now they were raw and tender and burned like fire.”

“Good whisky’ll put a man on his horse and drive a woman outta her petticoats.”

“For Mallonee, it was a nightmare, a furious, deadly madness of desperation, this clawing for a finger hold on the icy edge of a precipice.”