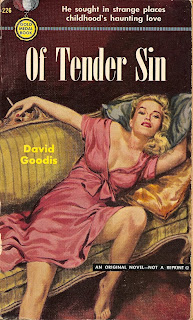 [Note: I am including both the original artwork for the Gold Medal paperback from 1952, as well as the more recent Serpent’s Tail edition from 2001. It’s just so good, I couldn’t resist.]

If there’s anything better than a David Goodis book title, it’s a David Goodis first line. And the opening to his 1952 novel Of Tender Sin (Gold Medal #226) is certainly among his best:

“It began with a shattered dream.”

Subtly despondent, it perfectly sets the tenor for the story to come, in which reality drifts in and out of focus, and the past and present are merged in a nightmare of psychological trauma. Characteristic of Goodis, the novel is largely introspective, and we readers share in the protagonist’s melancholy and sorrow. Tension derives not from action, but from emotion. It is the possibility for crime – the specter of murder, malice, and infidelity, that lies dormant in every gesture – rather than its execution, that drives the plot. This unique approach to plotting is what separates Goodis from most other writers, and also what makes summarizing his novels so difficult.

Alvin Darby has a secure job as an insurance salesman. He has a beautiful wife of six years who loves him. He doesn’t drink (unlike most other Goodis protagonists, who are alcoholics like the writer himself). His only vice seems to be that he smokes three packs of cigarettes a day, but that doesn’t worry him too much. So why does he suddenly awake in the middle of the night, thinking he heard a burglar? Well, he’s not sure. Maybe he did. And maybe he didn’t. So he looks at his wife, asleep. They love each other. But he hasn’t slept with her in weeks, and has no desire to. And then there is the matter of that burglar. Maybe he should get up and look around the house. Something seems to be beckoning him away from his wife, and out into the darkness, deeper into the unknown, further into the recesses of his subconscious. Somewhere, something is troubling him. But he can’t admit to himself what it is. 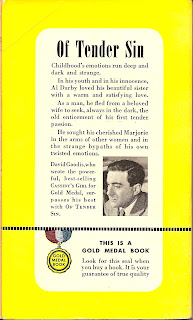 And then he overhears his wife on the phone with another man and is convinced she is cheating on him. So begins his spiral of paranoia and self-destruction as Alvin begins stalking the streets of snowy Philadelphia at night, pursuing old flames, experimenting with drugs, and recalling foggy, guilt-laden memories of his sister. Her platinum blonde hair haunts him like a strobing beacon in the fog: every woman’s hair he sees changes to that immutable hue, like some reoccurring dream. It’s yet another piece of Alvin’s psychological puzzle that he can’t quite put together.

Of Tender Sin is among the most reticently devastating of Goodis’ novels. Like Samuel Barber’s elegiac Adagio, the novel’s pacing is like a funeral parade yet it never loses its tension. Goodis describes in empathetic detail the slow dissolve of Alvin’s morals, emotions, and psychology, until he is barely a recognizable human from the inside. And this is what is so great about Goodis’ writing – his ability to put us right inside the character’s mind, to feel his every emotion, to share in his every memory. There is a poetic lucidity, a surreal clarity, to Goodis that is totally singular. The horror is not in the violence of the crimes, but the startling realism of the characters’ mindsets. Reading his novels, we can easily imagine ourselves in the same situations, making the same decisions, suffering the same fears.

Misery certainly loves company, and I’ve never come across any better company than David Goodis. But with him, it’s not so much just wallowing in another’s despair, but in finding a voice for our own quiet desperation. International conspiracies and mafia bosses never figure into his novels. Instead, Goodis’ characters are troubled by bad relationships, mundane jobs, loss of will, uncertainty of purpose, uncontrollable feelings of helplessness, and the terror of having nowhere to escape to. These anxieties are not so far from our everyday life, and ultimately this is what makes Goodis’ books so affecting and so unsettling to read.

Perhaps those of you who haven’t read Goodis are wondering why I want to read something that sounds so depressing? Those of you who have read Goodis know the answer. When I tell my friends about Goodis they are bewildered as to how bleak his books sound. All I can say is this: his writing is immaculate and evocative, and so full of feeling as few books are. If you haven’t read him yet, please go to your local independent bookstore and pick up anything they have of his. 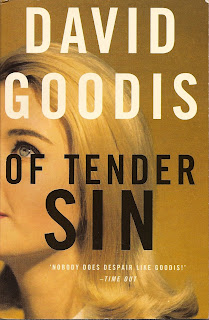 And now for my favorite quotes…I’ll try to refrain from quoting the entire book. Really, I thought about it… For those wanting more, they can head over to Hard Case Crime to read the first chapter of The Wounded and The Slain, another excellent read.

“He stared past her, at the door window, and saw the white fury of the snowstorm. As it raged, it seemed to beckon…”

“A cat came out of an alley, took a look at all the snow, and went back in. Farther on up the street a fat man, aproned and puffing, emerged from a restaurant and whiffed the cold air and gazed yearningly at the sky. As though even the dreams were up there, much too far away.”

“His mind was vacant now, and the only thing he knew was that he didn’t care. He walked through the pitch-black chasm of somewhere past five in the morning, his coat unbuttoned, the muffler missing, the snow inside his shoes and melting there, but no awareness of it, no feeling.”

“An hour later the pencil remained untouched and the yellow paper was a platter made of yellow glass. Beneath the glass a fleet of little white boats had gone down under the guns of an unseen armada, and there they were, quiet on the bottom of the placid lake.”

“Winter was gray and mean upon the city and every night was a package of cold bleak hours, like the hours in a cell that had no door.”

“It was very fast, that first time. They were on the couch, and then they were off the couch and it was all over. It was like jumping out the window and landing on the street. A quick ride, just like that.” 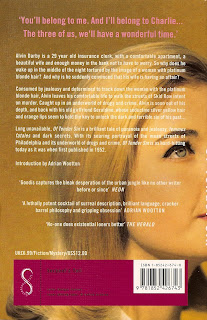 “Then all the nights continuing in a timeless path where there was only the green flame, the silver-yellow of her hair dripping over the edge of the couch, dangling over the dark floor that didn’t seem to be a floor at all, just a dark emptiness.”

“His head was bent low over the desktop and his eyes were closed. There was no feeling of being in any special place, and he might have been kneeling in an unlit cave, or seated in a smoky room where there were no faces, just a lot of eyes that looked at him. Or merely drifting on a slab of ice in a quiet region of white emptiness.”

“But still he ran, begging the street to show him a police car, or a policeman, or anyone to whom he could shout for aid. But all the street showed him was a mongrel under a corner lamp, unsteady on four shivering legs, trying to make up its mind between three garbage cans.”
Posted by Cullen Gallagher at 11:54 PM