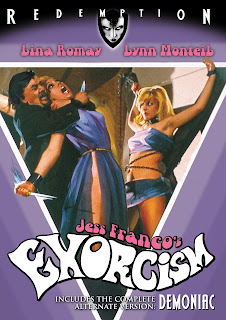 The opening sequence, of two women enacting an S&M performance on stage for an audience, introduces a key theme of the movie and of Franco's work as a whole: the intertwining of performance, role-playing, voyeurism, and eroticism. Nearly every encounter in the film, whether sexual or not, involves some element of performativity. Whether its two lovers expressing submission and domination, or a college-educated cop competing with his street-wise superior, Franco seems interested in the extent to which people are always acting, and whether even the most seemingly "normal" elements of our reality are, in some ways, fictional fantasies of their own.

The version of Exorcism streaming on Kino Cult is sourced from varying prints, and some scenes show minor damage (such as scratches), and certain sequences inter-cut between different prints in order to deliver the most complete version of the film possible. Despite this, the colors are strong and not faded, making this an overall very attractive presentation of the film. Kino's Blu-ray also includes a cut-down version called Demoniac (exclusive to the disc, not streaming), which focuses more on the horror elements of the film, and includes alternate footage and less nudity.