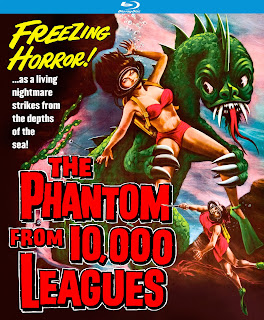 The Phantom from 10,000 Leagues (1955) is the type of movie that puts title and poster first—and story and production values dead last. And that’s ok! It’s schlocky good fun with a ragged monster that’s more cute than menacing. A bargain basement Creature from the Black Lagoon with a Cold War espionage twist, Phantom also embodies the highs, lows, and everything-in-betweens of what wound up on the bottom half of double bills in the 1950s. This particular movie accompanied Roger Corman’s Day the World Ended (1955), and together they made enough money at the box office to more than double their production costs. Sure, the monster doesn’t get enough screen time, and everyone uses the same boat, and nobody has a car, and there are lots of chance encounters happen on this one particular beach…but these sorts of decisions were made in the name of keeping the budget low, the production schedule quick, and the run-time short. So, maybe Phantom isn’t the horror classic that it tries to emulate, but it has an undeniable econo joie de vivre that makes ‘50s schlock so enchanting.

Here’s the setup. A doctor’s experiments with a radiation ray have attracted the attention of the US government, who have sent two undercover agents to find out what’s going on, as well as a mysterious enemy group who have sent two spies (a Tony Curtis lookalike and a beach bunny) to steal the doctor’s secrets. The radiation ray, however, has also turned a small turtle into a large phantom who haunts the beach, attacking anyone who takes a boat into its territory.

Directed by Dan Milner and produced by Dan and his brother Jack, The Phantom from 10,000 Leagues was made for American Releasing Company in its second year of production—the following year, it would change its name to the now legendary American International Pictures, which oversaw two decades of classic B movies, including Corman’s Poe series, and early features from Curtis Harrington, Francis Ford Coppola, Martin Scorsese, and Peter Bogdanovich. Knowing where the ARC would go gives Phantom an added level of interest and importance, as it was an early hit for the company and helped establish their reputation.

The Kino Lorber Studio Classics Blu-ray looks stunning, as expected from the company. It includes commentary from film historian Richard Harland Smith, and a Trailers from Hell segment with Joe Dante.