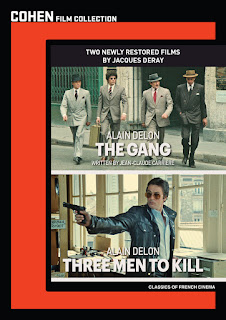 Making its Blu-ray debut from the Cohen Film Collection (distributed by Kino Lorber), Jacques Deray's The Gang (Le Gang) is a strikingly unusual and idiosyncratic arthouse gangster film that should hold many surprises for fans of French crime dramas. While it has moments that resemble French master Jean-Pierre Melville, as well as American films like The Godfather, The Sting, and Butch Cassidy and the Sundance Kid, stylistically the film is quite distinct from all of those.

The Gang begins with the titular group of men gathering before a job, and then jumps to directly after the job, as they return with their leader, Robert "The Crazy" (Alain Delon), wounded. This leads into a voice-over from Robert's wife, Marinette (Nicole Calfari), who takes the story back to post-war Paris where they meet at a nightclub, where Robert holds the patrons at gunpoint after an American soldier insults one of the gang. From here, the story alternates between idyllic scenes of the gang celebrating baptisms, relaxing in the countryside, and glimpses of their crimes filmed with Melvillain sobriety. Robert becomes increasingly brazen as their success grows, and it's only a matter of time before his craziness gets him—and perhaps the gang—killed.