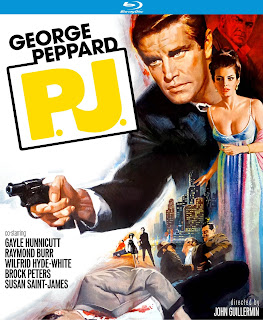 Kudos to Kino Lorber Studio Classics for releasing P.J., a missing piece of the private eye movie puzzle that had never before been on home video. Originally released in 1968, it’s a fascinating look at a genre—and an industry—on the brink of change. P.J. is poised precariously between two eras, it’s like a last-call for late-era Golden Age Hollywood decadence that also looks ahead to ‘70s ambivalence. P.J. recalls more the shaggy dog detectives of the following decade, like in Robert Culp and Bill Cosby in Hickey & Boggs (1972) or Elliott Gould in The Long Goodbye (1973), than a classical model like Humphrey Bogart.

In P.J., George Peppard (Breakfast at Tiffany’s) stars as the titular character, a down-on-his-luck private detective who has been reduced to framing a wife by posing as her lover so her husband can catch them in a motel room and have evidence for divorce; the husband even throws in an extra $50 so he can beat up P.J. to make it look more convincing. Later, P.J.’s loyal bartender gives him a tip on a bodyguard job for Maureen Preble (Gayle Hunnicutt), mistress to business tycoon William Orbison (Raymond Burr). From the pre-credit sequence, we know that Orbison has hired an assassin, though it’s not clear who he hired—or who he wants killed. Multiple attempts have been made on Maureen’s life, and P.J. is determined to keep her alive at any cost. As expected, the case is more complicated than P.J. or the audience can imagine.

The plot and its resolution might be somewhat staid, especially for fans of the genre, but that’s not what makes the movie interesting. It’s the film’s style that is utterly fascinating, caught between upholding and breaking traditions and being both traditional and modern. And the cast is uniformly superb, and includes wonderful character parts played by Brock Peters, Coleen Gray, and John Qualen, whose career went back as far as King Vidor's 1931 Street Scene and John Ford's The Grapes of Wrath (1940)

The movie seems unsure how to treat Peppard—is he a sex symbol or a schmuck? He’s the star, after all, so both Preble and Linette Orbison (Susan Saint James), daughter of William Orbison, are both throwing themselves at P.J. throughout the movie, but the film also delights in gloriously beating him up on multiple occasions, and frequently humiliates him by proving to everyone (including himself) that he’s not so great at being a detective or a bodyguard. But make no mistake, Peppard gives a fantastic performance, casual and laid back but still tough without being macho. He smartly plays the character straight and never winks at the audience. Some of my favorite moments are the smaller bits between him and characters with smaller roles, like his camaraderie with the bartender who’s always ready to open the cash register take P.J.’s watch in exchange for a few bucks.

The film’s style, too, seems caught between two eras of filmmaking. The nightclub scene seems like something out of Busby Berkeley, with scantily-clad women swimming in larger-than-life martini glasses as decoration. Director John Guillermin alternates between more traditional, classical Hollywood filmmaking and an impulsive, gritty, and at times frenetic style that seems more inspired by low-budget, independent films. When P.J. is searching for a shooter in Preble’s mansion, the formerly elegant camera setups switch to handheld, and at one point the camera turns in the wrong direction and almost loses P.J. Even the violence seems too brutal for the film’s style to comprehend, as though it isn’t prepared to capture the grislier elements of story, such as when a character is dragged by subway train to his death. There’s no blood, no sight of the body—it’s a chilling and sober kill, a moment that seems worlds away from the quaint attempt on Maureen’s life from earlier in the movie.

One of the most fascinating scenes, that displays the film’s stylistic duality, is when P.J. is jumped at a Greenwich Village gay bar. The bartender comes at him with a giant belt, which P.J. manages to shove through the bartender’s own hand before the gang viciously attacks him and claws at his throat until it bleeds. It’s a savage scene, however the blood is ludicrously fake, and even the editing seems to hesitate, unsure of whether to be delighted or disgusted at the display. Even the design and costumes seems of two minds: the obvious sound stage setting and stock beatniks suggest the naive, phony Village caricature out of Take Her, She’s Mine (1963), while the orgiastic, homoerotic violence and studded leather jacket evoke Kenneth Anger’s Scorpio Rising (1963).

P.J. is one of two feature-length films written by Philip H. Reisman Jr., who got his start scripting and occasionally directing shorts and newsreels for R.K.O. in the 1940s, and had been working steadily in television since the 1950s. Director Joh Guillermin was a British filmmaker who got his start in the late 1940s and eventually transitioned to Hollywood, where he brought an action-oriented style to films like The Blue Max (1966, also starring Peppard) and the fantastic western El Condor (1970), as well as the remake of King Kong (1976).