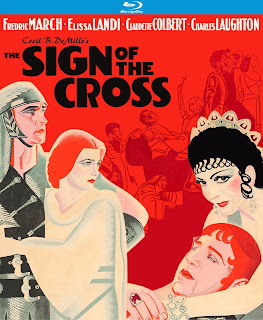 If you can't see The Sign of the Cross (1932) on the big screen, the next best thing is the new Kino Lorber Studio Classics Blu-ray, in which every lavish detail of Cecil B. DeMille's super-production is shimming in high-def detail. High visual quality is especially important for a director like DeMille who poured every dollar into his shots. If the audience couldn't see it, then it wasn't big enough for DeMille, a director who never did anything small. Born from and for the big screen, he sought to make his movies bigger than anything ever done before. Never one for subtlety, he envisioned spectacles and protagonists larger than the lives and worlds of the spectators in the theater. The Sign of the Cross is perfectly emblematic of DeMille's vision: the drama might be overwrought to the point of corn, but the production design and depictions of Roman debauchery and decadence are unarguably incredible.

The story is of a Roman prefect, Marcus (Fredric March), who defies orders from Nero (Charles Laughton) and crosses his lover, Empress Poppea (Claudette Colbert), in order to pursue a romance with a Christian woman, Mercia (Elissa Landi). It exemplifies the best and worst of DeMille's style. For all his delight in sex and violence, DeMille also had a solemn side when it came to religion, which can come off as didactic at best and lifeless at worst. He's also better at depicting lust than love. Claudette Colbert is scintillating, exuding sex with every line of dialogue or gesture. On the other hand, the romance between Fredric March and Elissa Landi is pretty dull and passionless—then again, it's supposed to be "pure" and contrast with Colbert, so perhaps it is tame by design (which doesn't excuse it).

For all his attempts at solemnity, DeMille is a hedonist through and through. His is a decadent, not a delicate, sensibility. An indulgent director, DeMille's at his best when he's able to depict characters who similarly indulge in pleasure, sex, food, wine, and violence. Laughton, in particular, shines as Nero, and his introduction, plucking a harp and sucking his thumb as Rome burns behind him, is among the highlights of the movie. The grandeur and greatness of DeMille's vision shows through in large set pieces—such as street scenes filled with beggars and vendors and passersby; orgies in grand palaces; and especially the outdoor arena where men are trampled and dragged by elephants and chained women are tortured by alligators and gorillas.

Credit is also due to DeMille's collaborators, especially art director and costume designer (and future director) Mitchell Leisen, cinematographer Karl Stuss (Sunrise), and especially Academy Award-winning editor Anne Bauchens, who started working with DeMille on his 1915 film Carmen and continued working with him up through The Ten Commandments (1959), her final film. Leisen's sets and costumes bring the atmosphere to life, Stuss's camera captures every sumptuous detail, and Bauchens leads the audience like a tour guide through DeMille's bacchanalian extravaganza.

Particularly with theaters closed, the radiance of Kino Lorber Studio Classics's Blu-ray are especially appreciated, as it is the closet we can get to the silver glow of a movie theater. Hats off to them for their continued commitment to high-def restorations of classic films in their correct aspect ratio and with informational bonus content. This particular disc includes two audio commentaries, one from DeMille biographer Mark A. Viera, and another from historian David Del Valle.