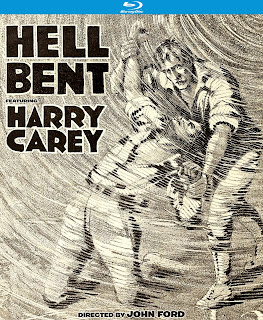 Hell Bent (1918) is John Ford's second earliest silent feature that survives, and thankfully  it is now available in a beautiful 4K restoration from Universal on Blu-ray courtesy of Kino Lorber Studio Classics. The plot's trajectory is simple enough—card shark falls for good girl; outlaw kidnaps girl;  card shark tries to rescue girl—but it is more of a framework for Ford to create marvelous little scenes that display all the hallmarks of his style: humor, action, and a magnificent eye for landscape. All in all, Hell Bent is a rollicking whirlwind of a western, blending action, comedy, and romance, freely and fluidly shifting between modes.

Hell Bent begins with a boldly meta moment in which Ford pays tribute to the painter, Fredric Remington, who inspired his eye for composition, while also addressing the anti-heroic tendencies of his protagonist. The scene starts with an author, Mr. Worth, reads a letter from his publisher:

"Dear Mr. Worth,
We would like it, if the hero in your next story were a more ordinary man, as bad as he is good. The public is already tired of perfect men in novels who embody every virtue. Everyone knows such people do not exist. Sincerely yours, H.T Barber, Assistant to the Publisher"

After reading the letter, Worth looks at a painting on his wall, Frederic Remington's "A Misdeal," which shows the aftermath of a poker game that turned violent. A chair is overturned in the foreground, men a strewn about the floor, some dead and some injured, while one man stands at the table. The camera tracks in close on the painting, and then cross-fades as the painting comes to life. A sheriff rushes in to find out what happened. The cheater has fled and is trying to cross the county line to safety. 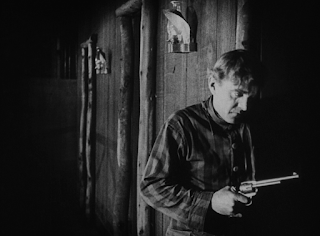 Our unscrupulous protagonist is none other than Cheyenne Harry (Harry Carey), who takes a moment to shake out all the hidden aces from his sleeves before continuing to safety. Having crossed the county line, he heads to Rawhide, where he rides horse into saloon in search of a room. With none vacant, he and his horse head upstairs to Cimarron Bill's bed. The horse starts eating Bill's Straw mattress while Harry forces Bill out the window at gunpoint. Bill returns, gun in hand, to give Harry a taste of his own medicine. Harry returns and, after singing a ballad together, the two decide to become friends and share the bunk.

Harry gets a job as a bouncer, and takes a liking to Bess Thurson (Neva Gerber), who has taken a job as a dance-hall girl in order to help pay her mother's hospital bills. Her brother, who used to work in the Wells Fargo office, teams up with outlaw Beau Ross (Joesph Harris) to rob the bank, but when their plans fail, Beau Ross kidnaps Bess and heads out to the desert, with Harry in hot pursuit. But when Harry doesn't return right away, his old friend Bill heads out in search for Harry.

After seeing this and Straight Shooting, it makes me mourn the loss of so many of Ford's silent films all the more, most of which no longer exist. His command of visual language, narrative, and character in these films is astonishing for how early in his career they are. Hell Bent and Straight Shooting show that despite Ford's youth, he was already a mature artist.

While the print of Hell Bent is a little rougher than Kino Lorber's Blu of Straight Shooting (reviewed here), it still looks terrific for being 102 years old. Thanks is owed to Universal for their commitment to restoring silent films. Kino Lorber's Blu also features commentary from Ford biographer Joseph McBride, as well as an archival interview between McBride and the director, and a video essay by fellow Ford biographer Tag Gallagher. For western fans, Hell Bent is an essential addition to any collection.